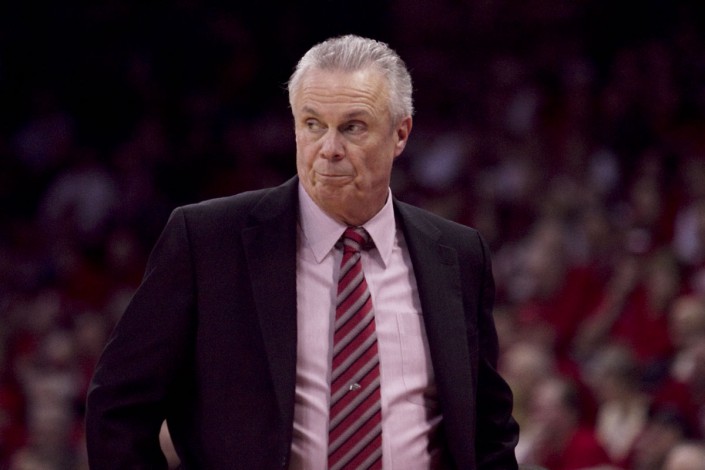 MILWAUKEE — What Bo Ryan refers to as the “third season” officially begins on Thursday for the Wisconsin men’s basketball team that opens its 2014 NCAA Tournament campaign against 15th seed American University.

Entering a stage like the NCAA Tournament, coaches often wrestle with a fine line between keeping their players focused on the business at hand and enjoying the moment because they might not get another one.

Ryan errs on the side of appreciating the moment.

“Business trip is not a good term to use because these young men have four years, for the most part, on their timeline where they get to do this. I’ve had a chance to do it more because I’m very fortunate,” Ryan said. “I try to give them the opportunity to appreciate what their surroundings are, how fortunate they are to have used their hard work to get something. That this is part of the getting.”

Wisconsin gets a chance to play an American team that finished second in the Patriot League during the regular season and won its conference tournament to earn a date with Wisconsin in the dance.

The Eagles will face a completely different animal than anything the Patriot League has to offer. They get to test their mettle against a team that finished second in one of the country’s best basketball conferences, and they are playing what is essentially a home game because the Bradley Center is just more than an hour away from Madison.

The odds makers don’t like American’s chances, slotting them as a 13 and a half point underdog, yet recent history has shown that David can run with Goliath as a No. 15 Florida Golf Coast upset No. 2 Georgetown in last year’s tournament.

“It’s more competitive. There are no bad teams in this tournament,” American head coach Mike Brennan said. “I guess there’s still sort of descriptions of high major and mid major, but I think those lines are being blurred a lot more — a lot of good players out there, lot of great coaches. So I think there are no bad teams. When you look at the scores in everybody’s leagues, the leagues everywhere are just so competitive all year long.”

Yet, Brennan doesn’t use examples from last year’s tournament to motivate his team.

“I’m not much on the bulletin-board-type stuff or anything like that. This is a different group and different team,” Brennan said. “We knew it was going to be a very difficult game on both ends of the court. We know we need to play almost a near perfect game and do so many things right just to be in the game. So, we know it’s a big challenge; our guys have worked really hard to be here. So, we’re looking forward to competing.”

The first-year head coach at American has his team playing a slow-paced game, holding opponents to an average of 58.6 points per game, that would look slow even compared to Wisconsin teams of old.

But it’s the Eagles’ offense that has caught all the buzz as they run the Princeton offense similar to that of Northwestern’s offense — a scheme that Ryan is familiar with from his coaching days in Pennsylvania.

“I see his team running it and it’s obvious he played in the system, knows how to teach – knowing the reads is one thing. Teaching people to use them and to understand them, that’s the next level. He’s definitely got his players at that next level. They run that offense better than just about every other team,” Ryan said.

Center Tony Wroblicky — one of two seniors on American’s roster — is the focal point of what the Eagles do on both ends of the floor leading the team in blocks and rebounds and checking in at second in scoring at 12.2 points per game behind freshman guard Jesse Reed.

The Patriot League’s Defensive Player of the Year, Wroblicky, will be given with the task of slowing down Wisconsin’s Frank Kaminsky — a First Team All-Big Ten Selection — who leads the Badgers in scoring and rebounding.

“He’s a great player. He’s very talented,” Wroblicky said. “He can obviously shoot very well and [is] a creator. It’s all about taking away his open three’s and stopping his touches in the post. If I can do that, I think we have a chance to limit his scoring.”

The combination of a somewhat unfamiliar offense and a slow-paced game not often seen in the Big Ten this season gives Wisconsin a lot to look at going into Thursday’s second round game. But, with the variety of teams and style of play the Badgers faced throughout the season, Kaminsky believes they will be able to draw from that and use it to their advantage so they aren’t added to the Goliath graveyard.

“We’ve been prepared with a lot of different scenarios in games, too. We’ve been up in games with big lead where we have to maintain it,” Kaminsky said. “That there’s been games where little big of lead. There’s games we’ve been behind and step on the gas and come back. All the games in the conference and nonconference schedule has really prepared us for what we can see in the tournament.”