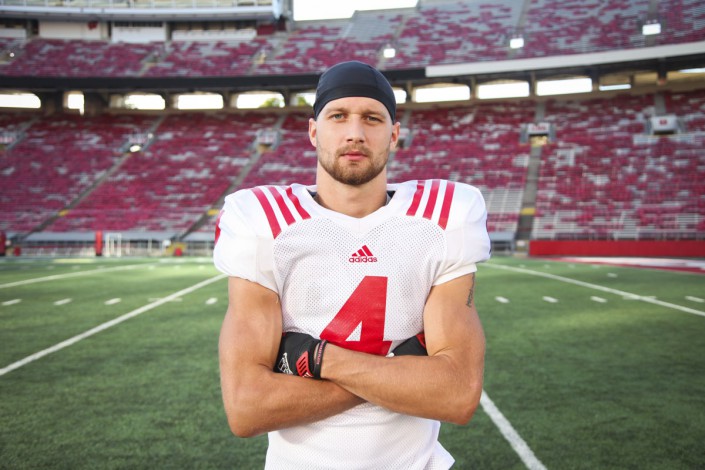 Senior receiver Jared Abbrederis is just the latest in a line of impressive walk-on stories at Wisconsin.

It’s not everyday that a wide receiver racks up 118 receiving yards and one touchdown in one quarter of play against the No. 4 team in the country.

It’s not common for a football player to be named a consensus first-team All-Big Ten team member.

And it’s certainly not often that one wide receiver is the target for nearly 40 percent of the passes thrown by his quarterback in any given season.

But for redshirt senior Jared Abbrederis, the plays that he makes each Saturday on the football field are only half of what makes him so unique.

A quick scan of his Twitter profile (@abbrecadabra) reveals another side to the star wide receiver: He is a dedicated Christian.

Growing up in a Christian home in Wautoma, Abbrederis said his faith has played a big role in his life from a young age.

“Both my parents are great,” Abbrederis said. “[I have a] strong family and I got a lot of support from them, that’s kind of where it began for me.”

Heading into college, Abbrederis eventually found a new Christian community away from home and, surprisingly, he didn’t have to look very far.

A number of other teammates were members of various bible studies — Aaron Henry, Chris Maragos and Brady Ewing to name a few — and even his sophomore-year roommate and current UW linebacker Ethan Armstrong.

It was through one of these bible studies that another wrinkle in the intrigue that is Jared Abbrederis reveals itself; Abbrederis is married and has been since May 26, 2012 when he wed Rachel Otto.

The two met in a bible study through Blackhawk Church in Madison in September 2010, and according to Armstrong — who was also in the study — Abbrederis knew she was the one from the moment he saw her.

“It was the first night there and we [walk] in and meet this girl, and her name is Rachel,” Armstrong said. “We’re leaving later that night, and I was giving him a ride back to our place because we lived together at the time. He looks at me and he goes, ‘I’m going to marry that girl.’”

“We pretty much started dating almost right away,” Abbrederis added. “We dated for about six months and then we got engaged and then one year and one month later we got married.”

Since then, Abbrederis says he couldn’t imagine his life any other way.

His schedule is busy with countless hours put into improving his game on the football field, but he says they always try to find time to spend together, even if it means something as simple as an evening in watching television.

Life in the fishbowl

While Abbrederis came into college still just a young, impressionable, soft-spoken teenager, he has since become one of the most well-known role models for Christians on campus.

In each of the past two years, he attended the weekly large group meeting of Campus Crusade for Christ, a Christian organization for UW students. Each time, his appearance has greatly increased attendance, most recently attracting a packed lecture hall of students in Mills Hall in Humanities to hear both Abbrederis and junior basketball player Traevon Jackson’s testimonies at a group meeting in September.

While this may be just one example, Abbrederis knows that with his high-profile image on the football field comes a great opportunity for him to help share his faith with others.

As a result, Abbrederis chose to spend last summer interning at Blackhawk Church in the high school ministry. He said he was given the opportunity to lead a bible study of high school boys and talk to them about the issues they face.

While football is still his professional goal at this point, Abbrederis said when everything is said and done, getting involved in Christian ministry might be something that he would enjoy doing.

Still, being a high-profile Christian athlete carries with it a lot of responsibility too.

As it is with athletes of any faith or background, they often become the representatives that others look to as a model for those beliefs and lifestyles.

While his stint in the NFL was brief, former Florida Gators quarterback Tim Tebow was also a vocal Christian, and during his run to the second round of the playoffs with the Denver Broncos in the 2011-’12 season, his faith was often heavily scrutinized.

“A lot of times, people are looking for you to fail,” Abbrederis said. “Obviously, we’re not perfect so we make mistakes. People are watching for those mistakes, and when you make them, they are all over it.”

As a result, Abbrederis says he takes life one day at a time, but he added that he constantly tries to keep his faith at the center of his actions — even on the football field.

He says both are there to remind him that the Holy Spirit is powerful and that he is always in God’s hands when he plays football.

“On the field I like to let my actions speak for themselves, and I give God all the glory,” Abbrederis said.  “At the end of the day, you just have to try to do the best that you can to stay [true to that].”