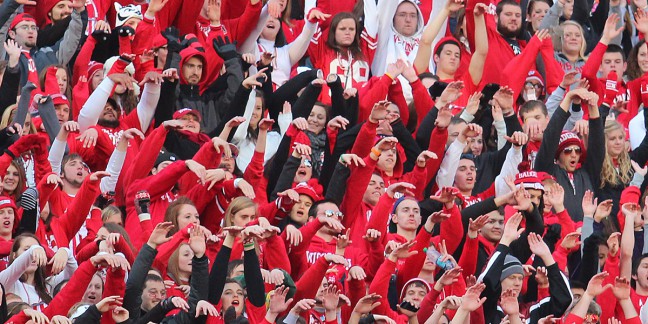 Take a quick glance at the results of Wisconsin’s big three sports and you would likely chalk up this year as one of the more successful years in recent memory.

The football team appeared in its third Rose Bowl in as many years after winning the Big Ten Championship against Nebraska.

The men’s basketball team held its own in the nation’s toughest basketball conference and earned a 5-seed in the NCAA Tournament.

Meanwhile, the men’s hockey team stunned fans by mounting an unexpected comeback in the second half of the season on it’s way to the WCHA Tournament Championship and a surprise appearance in the NCAA Tournament.

But if you take your eyes off the field, court or rink for just a moment and look up to the UW student section, the scenery you would find might not fit what you expected for a set of programs known for its success year in and year out.

A Badger Herald open records request found nearly 30 percent of the student season tickets purchased at the beginning of the basketball and hockey seasons never make it to the Kohl Center.

Even the back-to-back-to-back Big Ten champion Wisconsin football team – which sells out its student season tickets in less than 30 minutes with regularity – had an average of nearly 1,000 student tickets out of its 13,000-plus student section go unused for each game in 2012.

Still, while Associate Athletic Director Justin Doherty said the ultimate goal is to fill every seat, he added that there are a number of issues at play when it comes to lower student attendance – some of which he said are out of the Athletic Department’s control.

“From our standpoint, I think there are a lot of factors that go into the difference between [tickets bought and tickets scanned],” Doherty said. “It could be the day of the week, whether the game is over Winter break or not, could be game times.

Growing up in Stevens Point, fifth-year senior Joe Dewitt said he has been a Badger fan most of his life.

As a result, since he began attending UW, Dewitt has taken full advantage of the student season tickets the Athletic Department has offered in his time at the University – having had season tickets to football, basketball and hockey for at least one season each.

A testament to his dedication to UW athletics, Dewitt said he could only remember one time in his last few years as a football season ticket holder where he was unable to use his ticket.

For Dewitt, attending games allows him to play his part in contributing to the intimidation factor of Camp Randall or the Kohl Center.

“It’s half the reason why I make sure I’m there,” Dewitt said. “I want the Badgers to win and I think a big part of that is making sure that the student section is there and is trying to get in the head of the other team.

“You would be hard pressed to tell me that having a roaring crowd behind the Badgers didn’t help them get a close win.”

Unfortunately, the large numbers of unused tickets seem to indicate that student fans like Dewitt are slowly becoming the exception, not the rule.

As technology improves and new methods of consuming games continue to emerge, going to the game is no longer the only way to consume a game.

For many students, following the game remotely has become a more effective way to cover Wisconsin sports while also dealing with the many other commitments that come with the college lifestyle.

Combine the rigors of college with huge ticket packages and weeknight games for the basketball and hockey seasons and the decision to go to a game becomes a difficult one for students, Dewitt said.

“It is a huge commitment to get those tickets,” Dewitt said. “If you’re someone like me you’re not going to get the tickets unless you think you can go to a lot of the games. If you have a busy academic semester, it is a lot harder to go to a basketball game on a Tuesday or Wednesday night.”

For Doherty and the Athletic Department, the key to bringing students to the stadium cannot rest on the marketing of the team or the game alone.

Instead, Doherty believes the only way to combat unused tickets is to continue to work on engaging student fans and making them more involved in the game.

“If you’re having a good experience going to the game, hopefully your overall experience is something you like and that you want to continue to take part in,” Doherty said.

Beginning in the fall of 2012, UW Athletics launched a Twitter campaign to integrate students into the Wisconsin football conversation. Handing out free shirts with “#Badgers” printed across the back and building a new video board along the rim of the upper deck at Camp Randall to display student and fan tweets about the game gave students a new way to participate in Badger Gameday.

While marketing techniques like this have proved successful for the Athletic Department in the past few years, Doherty said he knows it will take a culture shift to bring the student sections closer to 100 percent attendance.

“I think our initiative going forward is to try to keep pace with [the students],” Doherty said. “Keep doing things that keep people interested in addition to the actual game itself.”

Even though expectations for all three teams will likely continue to be just as high, if not higher, than they have been the past few years when next fall rolls around, this does not mean student attendance can be expected to suddenly improve.

In fact, in some cases the Athletic Department is predicting exactly the opposite.

Doherty confirmed a report from the Wisconsin State Journal that the Athletic Department has budgeted for a $470,000 drop in ticket revenue for the men’s hockey team next year when they join the newly-created Big Ten hockey conference.

Some have pointed out the move to a new conference means many of Wisconsin’s closest hockey rivals will no longer be on the schedule each year – such as North Dakota, Colorado College and St. Cloud State – which in turn could lead some fans to forgo buying ticket packages.

However, others – including the players on the Wisconsin hockey team – think the move could have the opposite effect.

“I’ve had some conversations with a couple of different guys in the past few weeks and I think some students aren’t really educated about hockey – they didn’t grow up with it – but they might be football or basketball people,” sophomore defenseman Jake McCabe said.

“When they see the men’s hockey team is playing a two-game series versus Michigan or Ohio State, they know these teams and understand the rivalries from basketball and football and hopefully that carries over to hockey.”

Still, whatever effect the new conference has on men’s hockey, the players know no matter how well the Athletic Department markets the games, it is ultimately up to them and their performances to sell tickets each year.

“We always have our own pressure on ourselves to win games,” junior forward Michael Mersch said. “People want to come and watch good hockey. We represent the school and we want to represent it well.”