Behind every football recap, concert review and article about a campus protest, there are photographers running all over the University of Wisconsin capturing the moments of everyday student life.

This semester, The Badger Herald’s photo editors, Riley Steinbrenner and Sarah Godfrey will be discussing their experiences shooting some of these events and what it’s like to be behind the lens.

Hello fellow Badgers and readers of authentic collegiate news! Riley and Sarah here, your semester’s photo editors at The Badger Herald. We’d like to “kick” off our first week back on the grind with a look at our experience covering the season-opener football game at Camp Randall Stadium. For two student newspaper photographers who not only bleed red (well, yeah, oxidation is a thing too…you know what we mean) but would marry Bucky Badger in a heartbeat, covering this event was like putting two kids in a candy shop with fifty dollars cash each.

Around six o’clock, we trekked down University Avenue down to Union South where the most epic made-for-anyone-who-isn’t-pregaming-on-Breese tailgate party, otherwise known as Badger Bash, is held before every home football game. And when you come across the giant inflatable Bucky, you know you’re in the right place. From Babcock ice cream to live music to games, this was clearly the place to be — even Sam was there handing out free Mentos!

As we bee-lined through the crowd gathered around the “local celebrity” emcee’s stage behind Union South, we stopped to take it in the good vibes, smell of $6 brats and sights of already slightly-drunk middle-aged men whose off-kilter badger-head hats didn’t help support proof of their sobriety.

“Get behind the yellow line please!” a CSC event staffer shouted to Sarah and me after we backed up over the marking on the sidewalk.

“Is the band coming through here?” Sarah asked the flustered staffer.

“We don’t know yet!” she yelled. “They could be coming from this way or that way!” as she motioned both of her hands out and towards her in two different directions like Mike Leckrone himself.

“Where do you think they’ll come from?” I asked Sarah.

“I don’t know, but we should go this way,” she said, pointing towards Randall Avenue. “We might run into them before covering tailgating on Breese.”

Standing next to a graveyard of at least twenty tubas on the sidewalk, we ran into the red-caped super heroes of school spirit while they awaited the rest of their posse. As I was composing a shot of the brass instruments, one band member standing near hers asked ever so modestly, “Am I in your way?”

“No, you’re perfect!” I responded. Caught in the act — a photojournalist-in-training’s greatest fear.

“We should go grab some tailgating shots,” Sarah said as we followed a sea of red as it cut through the stone arch welcoming us to Camp Randall.

We decided Breese Terrace was a likely place to spot tailgaters, so we headed in that direction and arrived to see parties lining the entire street.  Students were socializing, taking shots from shot skis,  playing beer pong, hanging out on roofs and generally having a great time.

Randall Avenue also proved to be successful for tailgating photos, where I took this one of students flashing the W sign. After that, we crossed the street and headed for the stadium.

Once inside the media gate, we showed our passes to the student worker manning the credentials desk. “You’re good,” he said very unceremoniously after taking a second to look up from his clipboard to catch a glimpse of the five-by-three laminated passes dangling from our necks.

With no further directions of where to go (guess that student worker thought we were regulars) we followed chattering coming from around a corner in the dim, cement labyrinth of Camp Randall’s belly.

Under the fluorescent glow of a few scattered light bulbs dotting the ceiling, our eyes widened in excitement at the sight of white-capped, red-draped figures gathered in huddles throughout this industrious glade we found ourselves in.

Feet jogged in one place, only toes tapping the cement floor. Gloved hands reached high over huddles as the figures pumped themselves up to finally take the field.

A hush of anticipation fell over the figures as they began forming a queue. “How do we get to the sidelines?” I ask a CSC, flashing my pass like an FBI agent–because that makes it official.

“What does that mean?”

“You have to get past them,” he said, nodding to the drum-bearing figures as they and the rest of the UW Marching Band began to suffocate the exit tunnel.  “They’re gonna run you over!”

At least it would make for a good photo, right? I turned to Sarah, “Well … we’re goin’ in!” as we pushed through the nicest crowd on campus. Needless to say, we did not get run over, but how cool would that have been to say we got mowed down by the best university marching band in the country? (I guess that’s why we didn’t.)

Stepping on the field for the first time was a surreal experience.  Being able to experience the game while standing on the field, instead of the student section, made it so special. I had a front row seat to the game and the band performances, as well as a 360 view of Camp Randall.

Being able to walk around and take photos throughout the entire game, instead of being crunched up against against other Badger fans on a bleacher, was also a plus. Being on the field did have a few limits though. There were so many photographers and video crew on the field, that there had to be some restrictions on where we could shoot.

“Feet behind the white sideline,” a worker scolded Riley and I, even though we had maybe one toe over the line.  But of course we moved back, which allowed another photographer to push closer. However, later we luckily happened to be on the opposite end zone of most of the other photographers, and took some superb shots of the touchdown heading our way.

When covering sports, The Herald social-media department likes to update the Instagram account throughout the game. And if you’ve ever tried to make a post during a football game, you know Bucky wifi is high-speed internet in its most archaic form.

Right before half-time, while The Herald’s Instagram was busy turning gears to read the photos from my camera’s mobile adapter, we heard a roar of cheers from the crowd.

“What happened??” I turned to Sarah.

“I think we intercepted,” she responded, looking at the jumbotron’s replay.

“Ah and we were right there!” Alas, one of the many gives and takes when it comes to sports photography. Sometimes you’ll miss the shot, sometimes you’ll be in the perfect spot.

Being on field with the marching band — both during their half-time performance and during Jump Around after third quarter — was such an unexpectedly-inspiring moment of the night to photograph. I think it’s a common characteristic for photographers to feed off the energy of the people they’re photographing. When that happens, the camera is no longer seen as a distraction — it goes unnoticed.

The rest of the game turned from one that could have potentially been the most embarrassing to photograph (I mean, can you imagine deleting over a hundred photos of Hornibrook getting sacked?) to one that was the most memorable to photograph — Big Red smeared Big Blue 10-59! There’s something about sports photography that makes it so addicting, and you never know that reason until you’ve snapped the perfectly composed and focused exposure. Freezing the moments of running back Garrett Groshek leaping into the endzone or safety Joe Ferguson making an interception and hundred-yard return is already one of my favorite memories as a Badger.

Fifth quarter is a unique experience for Wisconsin fans. Being on the field along with the band members and Bucky made it even more exciting for Riley and me.

We walked around and snapped pictures but also sang along to the popular Fifth Quarter songs such as “You’ve Said it All,” “Tequila” and of course, “Varsity.” We also witnessed Bucky playing leap frog, and saw band members dueling it out in a push up contest.  The students who stayed for Fifth Quarter were extra enthusiastic – especially since it was the first game and we won!  They sang, danced and added to the craziness of the quarter.

“I’m glad we stayed the whole time!” Sarah said as a CSC shooed us off the now empty endzone — some people actually want to leave Camp Randall at some point I guess. But as for the UW Marching Band, they were still serenading ticketholders listening from the parking garage by the light of the moon (and streetlights). And that’s why you stay until the very end. On, Wisconsin.

For more photos, please click through the gallery below: 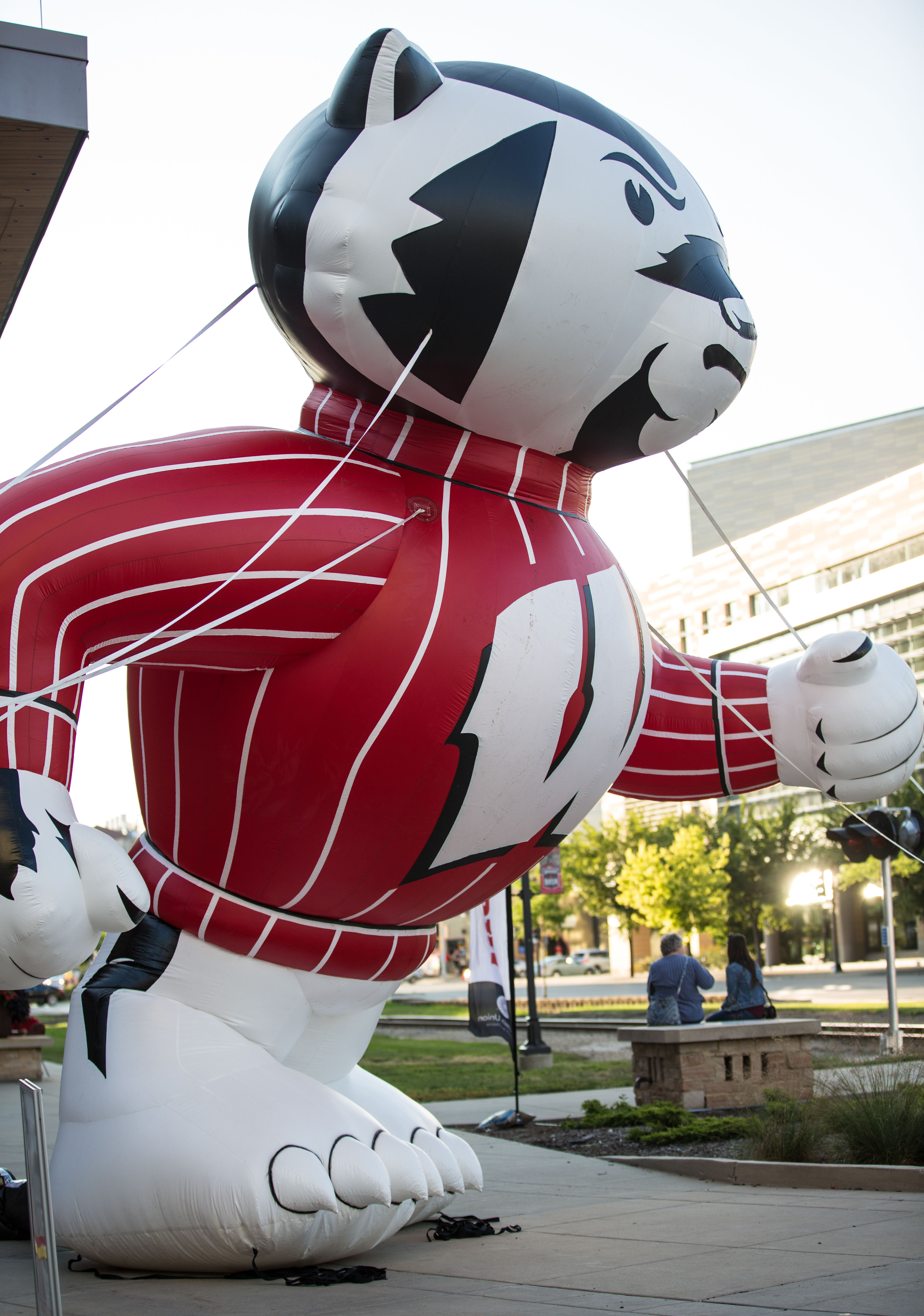