Gov. Tony Evers failed to address the achievement gap as State Superintendent of Public Instruction and now wants to freeze a program proven to address the problem.

Wisconsin has one of the worst academic achievement gaps between Black and white students in the U.S. Black students fall considerably behind their white counterparts across all school subjects. Furthermore, the disparity between Wisconsin’s Black and white students’ graduation rate is the largest in the nation with a difference of nearly thirty percent for the 2015-16 academic year.

Evers himself characterized the achievement gap in Wisconsin as “extraordinarily horrible,” yet he did not do anything to tackle the problem when he held the optimal position to do so as State Superintendent of Public Instruction. Within the 17 years he was in office, the achievement gap barely shifted. 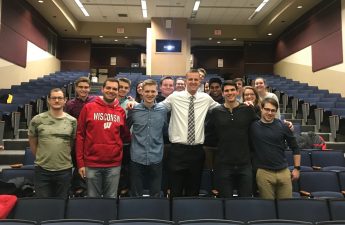 Now, as governor, Evers has decided to address the achievement gap problem by proposing to suspend expansion of independent public schools and freeze or cap enrollment towards Wisconsin’s Parental Choice Program which allows students to attend private schools using a taxpayer-funded voucher.

Therefore, Evers is perpetuating the viability of achievement gap in Wisconsin. He is attacking a program proven to work in the fight combating achievement gap inequality. Consequently, from this action, he is also harming the opportunity for public schools to address the problem.

Because school choice increases the quality of public schools, Evers is also harming the already struggling public school system by limiting school choice programs. School choice creates positive competition between schools which produces an environment of continuous improvement. It forces private and public schools alike to critically evaluate their methods of instruction and educational atmosphere and work to advance themselves for the good of their students.

The fact of the matter is simply this — even though he had seventeen years to do so as State Superintendent, Evers is only now addressing the achievement gap for personal political benefit. His actions would be favorable to him twofold — he could punish the parental choice programs under the guise of academic equality while appeasing big donors and teachers’ union lobbying groups simultaneously.

Instead of working with the Wisconsin legislature to improve academic achievement equality in all of our schools, Evers has chosen the side of politics. He has disregarded the fact that parental choice promotes higher academic performance in all students, no matter their race or socioeconomic background. In the meantime, our children are the ones being hurt the most. The Executive Vice President of the Wisconsin Institute for Law and Liberty, CJ Szafir, said it best, “Evers is putting himself in front of the schoolhouse doors, telling low-income children that they cannot go to the best schools.”

In light of the successes the Wisconsin Parental Choice Programs have had against achievement gap inequalities, Evers should reconsider freezing its enrollment. He is using the achievement gap as a mask to disguise his attacks on school choice. Evers needs to put the future of our children and their education at the forefront of his actions instead of adhering to political ulterior motivations.

Emily Smith ([email protected]) is a sophomore majoring in political science and philosophy. She is the policy director for the College Republicans of UW-Madison.