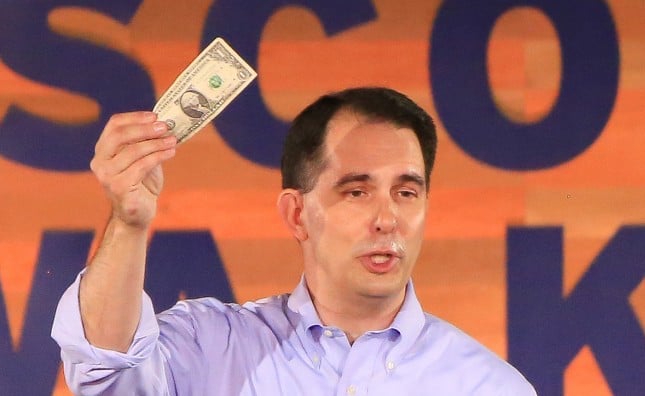 With the gubernatorial elections right around the corner, Wisconsin Democrats are looking to finally make their dreams come true and remove Scott Walker from his eight-year reign as state governor. But some believe the party is struggling to compile a substantial economic argument when, by most metrics, Wisconsin’s economy is doing well. Unemployment is down and wage growth is on the rise. Democrats say the statistics don’t adequately represent the state of Wisconsin’s residents. But how can one argue against statistics when they are the driving force behind economic evaluation? For Democrats, there are two responses to this question. For Republicans and those who value hard facts and numbers, there is one counter-response.

The first reply Democrats can give when economic statistics are not in the favor of the incumbent party is a reminder that economics is a social science, not a hard science. We should be wary of the person who comes along claiming they understand how the economy works and what can be done to “fix it.”

The market emerges from human behavior and the somewhat “random” choices people make when it comes to spending and saving their wealth. For his acceptance of the Nobel Prize in Economic Science in 1974, Friedrich Hayek delivered a brilliant and poignant speech titled, “The Pretense of Knowledge.” In it, he calls his fellow economists to humility and caution about how much the field truly knows about how the economy works. Similar to how laws of physics describe how the world works, laws of economics can take on an explanatory role. But unlike physicists who need only study the average behavior of atoms to derive precise laws, economists and other social scientists cannot so easily understand human behavior which is irreducibly complex in terms of its averages.

Despite controversial first year, improving economy may catapult Trump to second termThough his presidency is one of the most polarizing in United States history, President Donald Trump somehow has a chance Read…

Hayek discusses how we can know what causes unemployment — the structure of wages and prices has been distorted, and what is needed is some kind of shift in the wages to match the supply of labor. There is no quantitative data for economists to use to pull all the right levers and find that sweet spot. They can only make highly educated guesses. Hayek offers a simple example to illustrate this. Consider a ball game between equally skilled players. One can safely predict the outcome of the game with a sufficient amount of observable data. But until one can know every minute piece of detail, down to the players’ perceptions, attention spans, hand-eye coordination, the physical states of their muscles and body organs etc., there will always be some small amount of uncertainty in the prediction. Similarly, statistics about the economy can help diagnose problems and design remedies, but there will always be some ambiguity.

The second response Democrats can give when the statistics are not in their favor is to try and understand what the numbers mean. Why are wages rising? Why is unemployment dropping? For example, every month, the Bureau of Labor Statistics conducts a Current Population Survey, recording how many people are employed, unemployed and out of the labor force to determine one of the most well-known labor market indicators, the unemployment rate, which is the number of unemployed people as a percentage of the total labor force. To be “unemployed” you have to be three things simultaneously: (1) jobless, (2) looking for a job and (3) available for work. While the unemployment rate helps us understand worker power loss, it is not, at its face, meant to be read as an indicator of a healthy economy. A low unemployment rate, as the New York Times and the Brookings Institute point out, could be a sign that many eligible, working-age people are not looking for jobs.

For those who value statistics and numbers, there is one counter to all of this. This rant against statistics when they are not in one’s favor is all a sort of reductio ad absurdum. Everyone starts on the moral high ground, calling for the truth and factual evidence, but then when the numerical data that once supported rallying cries for change now say the status quo is working, suddenly the argument becomes that we need a better interpretation on what kinds of big-picture knowledge economic statistics can truly entail for Wisconsin.

Now the arguments need to be more anecdotal stories of working-class Wisconsinites. Democrats have both statistical and anecdotal types of evidence working in their favor. They just need to focus less attention on making Walker look bad and more on how they can use the data to help predict what kinds of remedies actually work.