Speaking in Nashville Feb. 27, Vice President Mike Pence told a crowd of anti-abortion activists “how proud” he was to cast the tie-breaking vote in the Senate for a bill that allows states to defund Planned Parenthood.

The pleasure Pence took in harming an organization that provides healthcare to millions of Americans may seem odd, but his statement is nothing new for conservatives.

Planned Parenthood has been vilified by right-wing lawmakers for years, when in reality, the organization provides necessary, affordable services to men and women across the U.S. In the past, these threats to defund the group were largely tripped up in the courts or blocked by the Obama administration. But the Trump administration has launched new attacks that may prove fatal.

From 2016-17, Planned Parenthood had 2.4 million patients and provided 9.5 million services. Of these services, more than half a million breast exams and pap smears were conducted in total. For 75,040 women, these tests detected early-stage cancer or identified other abnormalities.

Almost half of the services provided were for STI testing and treatment (for men and women), allowing 222,365 patients to get STI treatment. 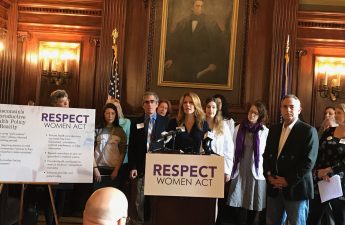 In Texas, a recent study shows that after the State Legislature excluded Planned Parenthood affiliates from the state Medicaid fee-for-service program, there was a 35 percent reduction in the use of long-acting reversible contraception.

Prohibiting abortion training for UW medical students is absurdThe war on women’s rights continues in the great state of Wisconsin, with the Senate’s health committee approving a bill Read…

A lot of the controversy with Planned Parenthood stems from their status as an abortion provider. Even though abortion made up only 3 percent of the services provided by the organization between 2016-17, it is important to remember that the right of women to seek an abortion is protected by the 14th Amendment as upheld by the Roe v. Wade Supreme Court case in 1973.

And the reality is, making abortions illegal won’t prevent them from happening.

It is estimated that in the 1950s and 1960s, between 200,000 and 1.2 million illegal abortions were performed per year. What’s different now is that women, even women in lower-income communities, can get abortions from safe providers.

Additionally, attempts to eliminate federal funding for Planned Parenthood often avoid mentioning that federal funds cannot be used to fund abortion procedures as outlined by the Hyde Amendment. Federally defunding Planned Parenthood as posed in the Defund Planned Parenthood Act of 2017 would only mean that millions of people would lose access to cancer screenings, STI testing & treatment, contraceptives and other necessary healthcare services.

Brianna Koerth ([email protected]) is a junior majoring in political science. She is also Chair of UW College Democrats.