As the Wisconsin gubernatorial race heats up, among the issues dividing candidates is the controversial 2011 Wisconsin Act 10. When Gov. Scott Walker took office in 2011, he inherited a $3.6 billion budget deficit projection, which he attempted to address with Act 10, also known as the Wisconsin Budget Repair Bill.

Among other things, the bill slashed workers’ benefits and pensions and effectively eliminated collective bargaining, or the ability of public employees to negotiate wages and other employment issues as an organized group. Following the passage of Act 10, Wisconsin labor unions saw huge declines in membership, as well as significant losses in democratic campaign coffers and volunteering.

This bill came into play around the same time that Wisconsin legislators were grappling with the institution of right-to-work laws. These laws essentially prohibit forced unionization of laborers and union security agreements between companies and workers’ unions. While this may sound like something that would allow greater freedom for laborers and uphold freedom of association or dissociation, the impact of these laws is far more negative. 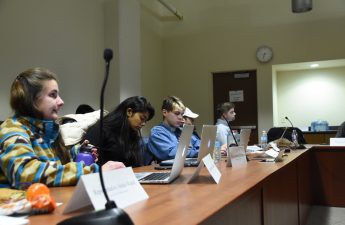 In reality, right-to-work laws drive down wages and benefits for laborers, making it harder for unions to sustain themselves. The financial difficulty in sustaining the unions means that unions have less ability to lobby for workers’ rights in working conditions, salaries, time off and the like. In essence, these laws further complicate collective bargaining and unionization.

By 2015, legislators had succeeded in passing a set of right-to-work laws in Wisconsin, and as of 2017, Wisconsin was one of 28 states to have implemented such laws.

Among the nine leading Democratic candidates vying to take down Gov. Walker in this year’s election, there is little consensus on what to do about Act 10. State school superintendent Tony Evers and Wisconsin firefighters president Mahlon Mitchell are frontrunners in the race and have both indicated commitments to either repeal the bill or work within its provisions to increase workers’ rights. Other candidates, such as Paul Soglin, have indicated wishy-washy intentions to support workers’ rights, but haven’t outlined specific plans to do so.

University of Wisconsin political science professor David Canon outlined the importance of the issue, particularly within the Democratic voter base but argued, “I would imagine that many independent voters and some Democrats have moved past the issue now and are more interested in other issues.”

Similarly, UW-La Crosse political science professor Joe Heim argued that focusing on Act 10 won’t hold many benefits for candidates because those who care about the issue are already aware of it. “You don’t need to remind anyone of it,” Heim said. “Time to move on, and I would hope the Democrats are smart enough to look forward.”

While it’s true that most people have already made up their minds about where they stand on Act 10, these postulations underestimate the political power that laborers, especially teachers, could have in this election. Around the country, teachers have been stepping forward and standing up for their political rights. Right-to-work laws and bills such as Act 10 have galvanized movements of teachers around the country, and these movements are having an impact.

West Virginia Gov. Jim Justice signed a bill the morning of March 6, granting a 5 percent pay raise to all state workers. The bill passage comes as a result of a nine-day statewide teachers’ strike, wherein teachers protested their low pay, which ranks 45th in the country, as well as rapidly increasing health insurance premiums. Despite the fact the teacher strikes are actually unlawful in West Virginia due to their right-to-work laws, teachers and school administrators in all 55 counties walked out Feb. 22 to bargain for their rights as workers.

Around the country, other conservative states with restrictive right-to-work laws may soon see similar movements — rumors of teacher strikes in Oklahoma and Kentucky have started to gain traction, and some workers in Pennsylvania have discussed rallying in support of their neighbors in West Virginia.

As the race for governor heats up here in Wisconsin, voters and legislators alike should be aware of the political power that teachers and other union workers could hold.

Teachers are responsible for educating, empowering and motivating the next generation of voters — possibly the greatest political power anyone could hold, but they are not stopping there. Around the country, teachers have shown that they are not afraid to take a stand on their rights as workers, whether that means fighting for higher wages or demanding increased gun control to protect themselves and their students.

The New York Times recently published a column highlighting the “revival of West Virginia’s long-dormant tradition of bold labor activism,” and I wouldn’t be surprised to see that same galvanization right here in Wisconsin.