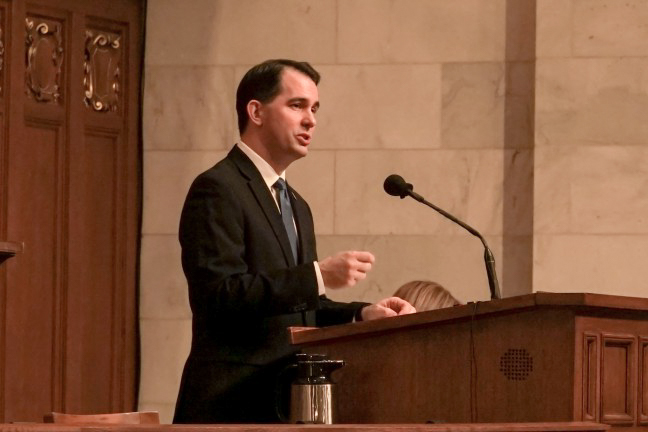 On Jan. 11, the Centers for Medicare & Medicaid Services issued a new policy guidelines memo concerning work and service requirements for Medicaid, to the glee of Gov. Scott Walker.

Walker’s excitement stems from the fact that the Centers oversee and set standards for the state-run Medicaid programs such as Wisconsin’s BadgerCare. Referencing multiple petitions from various states, including Wisconsin, the Centers are moving forward and allowing states to implement experimental projects that affect Medicaid eligibility. “This new guidance paves the way for states to demonstrate how their ideas will improve the health of Medicaid beneficiaries, as well as potentially improve their economic well-being,” said Medicaid and CHIP services Director Brian Neale.

In line with Walker’s past proposals, the federal guidance seeks to encourage all able-bodied adults of working age to be employed or engaged in “work or participation in other community engagement activities – including skills training, education, job search, volunteering or caregiving” as an eligibility criterion for Medicaid. While Walker’s now federally-sanctioned policy objective appears logical and fair on the surface to some, it is based upon a perversion of Medicaid’s central aims and an illogical set of methods proposed for perpetrating this perversion.

Medicaid’s intention is to provide insurance to low-income people unable to purchase adequate coverage on their own through a system of matching state and federal subsidies. Since its inception as part of the Title XIX Social Security Amendment in 1965, this central aim remains constant. It is important to remember these new guidelines were published in response to requests for Section 1115 Demonstrations that allow petitioners to engage in experimental state-level Medicaid projects. These state-level projects are meant to be pilots that may potentially be instructive. This memo was in no way recognition of a fundamental shift in Medicaid’s central aim.

Walker’s proposals have repeatedly run against the grain of this aim. From his historic, overzealous enthusiasm for drug screening entitlement recipients, to his newer insistence that able-bodied BadgerCare participants work, train or serve in some other capacity, the governor has a history of leading public crusades that undermine the principles of increasing enrollment and access for low-resourced parties throughout the state of Wisconsin.

Even though Wisconsin currently ranks sixth for states with low levels of uninsured individuals, the unwillingness to expand eligibility for Medicaid — with federal assistance made possible by the Affordable Care Act — further signals divergence between Walker’s goals for BadgerCare and the true aim of Medicaid. If his goal was to increase coverage, he would accept the increased federal subsidies and lower eligibility thresholds for BadgerCare, which would, in turn, help many more low-resourced individuals receive medical insurance. Of course, this is not the case, as he continues to speak in favor of increasing eligibility requirements.

If one is satisfied with the state’s sixth-place ranking for insurance coverage and is more concerned about unemployment, then it may very well seem logical to add emphasis to jobs and service programs. The fact remains that tying BadgerCare eligibility to these programs is an unfortunately roundabout way of improving the skills and job prospects of Wisconsinites.

Establishing more state-funded retraining and skill-building opportunities that are not predicated on whether one is a BadgerCare participant, but open to all, would surely bring about more positive gains for workers. Although Walker has fallen short of his chief campaign promise of helping create 250,000 private sector jobs, with unemployment at 3.4 percent, it will remain more vital to increase the skills and education of the already working labor force than focusing on headline-grabbing job creation numbers.

As the gubernatorial race kicks off, Walker’s true intentions will show. Will his proposals simply continue to signal his affinity for making entitlement eligibility more difficult to attain as a nod to the GOP base? Or will he work tirelessly to ensure his proposals have the desired positive effects for the people of Wisconsin?

Emmett Sexton ([email protected]) is a sophomore majoring in sociology and economics.