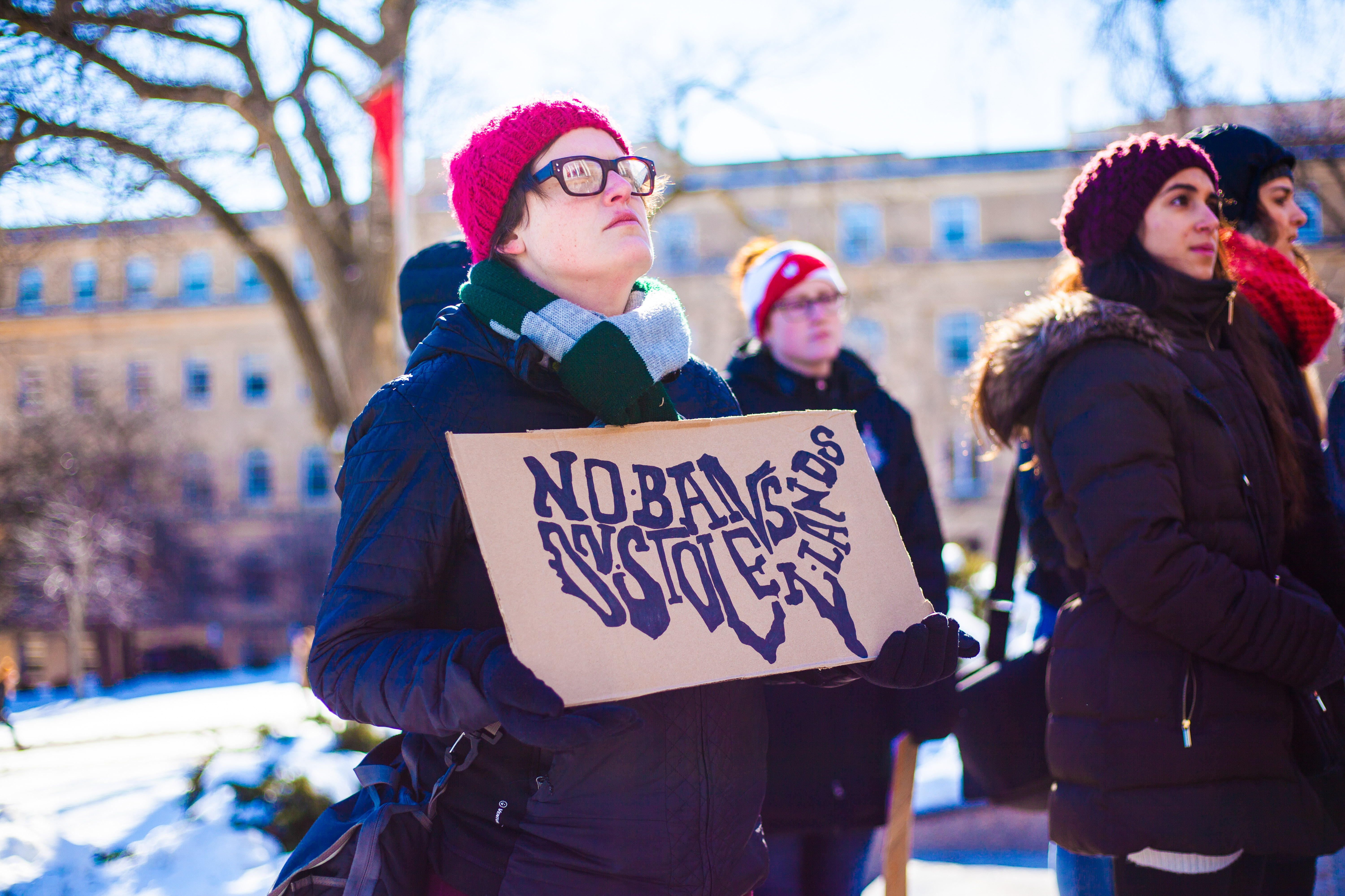 After spending more than a year campaigning on the promise of sealing off America’s borders to “radical Islamic terrorists,” President Donald Trump is finally on his way to making good with his supporters. Within days of swearing the oath of office, Trump signed into law an Executive Order banning immigrants from seven Muslim majority countries.

Trump’s original travel ban sparked protests across the nation, including here at the University of Wisconsin, where more than 200 students gathered to speak out against it.Chancellor Rebecca Blank issued a statement in conjunction with the student protests, calling for the “reconsideration of the [executive order] barring the entry or return of individuals from certain countries.”

Quickly blocked in federal court, Trump went back to the drawing board, producing a second travel ban, much to the chagrin of Hawaiian United States District Judge Derrick Watson, who issued a hold on the order just hours after its unveiling at the end of March.

Since then, Trump and his administration have found themselves stuck between a rock and a hard place. One of their keystone pieces of legislation either needed to be drastically toned down, or the Supreme Court would need to rule in Trump’s favor, deeming the Executive Order constitutional.

Unfortunately, Trump got lucky. After five months of legal battles and ignorant, narcissistic statements, the Supreme Court ruled at the end of June to allow parts of Trump’s second travel ban go into effect. The Court agreed to ban any foreign nationals that “lack a bona fide relationship with any person or entity in the United States”.

Under this definition, “close” members of family, such as mothers and fathers, step-children and sons or daughters-in law are allowed to remain in, or enter the country, while grandparents, grandchildren, aunts and uncles, among others, are kept out.

While the Supreme Court ruled that grandparents and cousins constitute “bona fide”, or genuine relationships, the Trump administration interpreted their ruling to exclude these groups because their familial ties were not strong enough. The Supreme Court further ruled that foreign nationals with “formal ties” to the United States, such as students or professors at a university, would not be subject to the ban.

President Trump’s new travel ban is just as racist as the last oneLast week, President Donald Trump signed a new, revised version of his controversial travel ban. There are some key differences, Read…

As an institution that prides itself not only on offering a diverse, culturally rich academic environment for its students but on attracting and retaining the 4500 international students from 100 different countries that call UW their home, a Trump travel ban even partially implemented is a huge problem.

Students traveling to and from school should not have even a sliver of doubt in their mind that they will be humiliated at an American airport because of the country that issued their passport, the color of the skin or the hijab they may wear to profess their faith.

Families should not be divided into categories of who can visit their student in America and those who cannot because the familial ties don’t run deep enough. The color of your skin, your native country, native language or your religion should not immediately pose a threat to a country and should not result in a travel ban that bars you from entry into a country.

A large part of what makes UW so unique is its ability to cultivate an environment that encourages discussion between students and faculty from all walks of life and from all cultures. Any implementation of a travel ban is a massive step backwards for UW, and the country as a whole, as it creates an America that cannot protect and does not value the lives of thousands of people who do, or desire to, call this country home.

The Supreme Court has a long way to go until October, when they will officially rule on the second travel ban. School will be back in session in Madison, campus teeming with thousands of students who may never be personally affected the Court’s decision.

But, the students that will be affected will have the decision of nine justices and the hatred and ignorance of one man looming over their shoulders, and that is simply unacceptable.