When reaching a goal you inevitably encounter hardship, obstacles, criticism and even rejection. The conservatives on this campus understand the challenges faced when it comes not simply reaching a political goal, but just being yourself.

This happen every time you speak up in class and get shot down by a peer or professor. Or when you receive dirty looks when others see your Republican laptop stickers. Or when you hear snickers in class anytime you’re associated with the words “Republican,” “conservative,” “Trump.” This campus’s inappropriate, but not surprising, dismissal of the conservative perspective can strike doubt in the hearts of many students. Sometimes it takes courage to stand up for your values when you know you will only receive backlash. Many maybe even ask themselves “Why? Is it worth saying, or thinking the way I do? Am I wrong?” 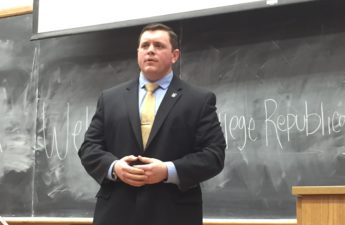 Nov. 8, 2016 was more than just victory. In the hearts of many students on this campus it represented hope. It was a moment of reassurance in the minds of conservatives here on campus, it was confirmation we are not wrong, we are not evil, our values and beliefs are not some ludicrous joke. Nov. 8 our doubts were subdued by purpose, as it dawned on us, the realization our voices are the voices of the American people; the realization that when we speak up on this campus, we put ourselves and our beliefs on the line to inspire action in others, and make change in government.

This past year has been huge for the College Republicans of the University of Wisconsin. It wasn’t easy. An honest glance at the group would reveal the controversy and debate that surrounded campaigning for the presidential election. In light of President Donald Trump becoming the Republican nominee, we lost some great members and some great friends and we gained some great new additions to the team too.

This election cycle put everyone at odds, including conservatives. There were those who fought passionately for Trump and those who fought passionately against him. So while divisions were created, the greatest highlight was our ability to reveal to our campus and our country that “Republicans” and “conservatives” aren’t a stereotype. The Republican Party is a party made up of varying opinions, unique individuals, people who think critically and have the ability to engage in positive debate to challenge one another.

Yet despite our differences, Republicans won not only the presidential election, but we also secured a majority in the House and Senate. We are a powerhouse.

For the past eight years Republicans have anxiously waited their turn, and here we are ready to make big changes to government; to save the American people from drowning under the suffocating weight of President Barack Obama’s taxes. We’re here to take a stand and improve our foreign relations like a cowardly Obama never did. We’re here to save the average American’s health care from a bleak future under “Obamacare.” We’re here to improve national security to protect all Americans, and we’re here to get serious about real policy; real initiatives home and abroad, instead of liberal agendas and political correctness masqueraded around as progressive policy.

Republican health care bill breaks almost all of Trump’s promisesIt is finally here, what everyone on both sides of the isle has been waiting for. The GOP’s proposed replacement for Read…

We look forward to what our Republican powerhouse Congress and Trump’s administration has to offer us. We haven’t yet successfully reformed health care, the tax system or national security, but we are well on our way.

Stay humble. Because the point of our government is to serve the people, one of its main principles is conflict and compromise. So take advantage of our victory, take advantage of our voice. Next year on this campus, I look forward to seeing all of you reach out to others, people who are different than you, as friends. Engage people in conversation so that you learn something and they do too.

Emelia Rohl is a junior majoring in journalism and mass communications. She is the communications director for the UW College Republicans.