I recently read an article titled “Are There Limits to Online Free Speech?” by Alice Marwick, assistant professor of communication and media studies at Fordham University. In the article, Marwick recognizes the increasing amount of discourse surrounding what constitutes free speech in a country that is more politically polarized than ever before. She discusses how this polarization has acted as a catalyst for heated debate across the U.S.

After reading her article, I’ve started to notice an emerging division of opinions concerning freedom of expression in the U.S. What many Americans view as a constitutional right under the First Amendment, many others view as unacceptable hate speech.

To an extent, this divide makes sense, considering there are countless controversial issues circulating within our political discourse. Recently, though, free speech has been used as a defense for mistaken opinions, allowing for the normalization of hate driven prejudices.

On Feb. 1, a speech by Milo Yiannopoulos, a former Breitbart editor and “alt-right” provocateur, was canceled at the University of California, Berkeley after violent protests broke out on the campus in response to Yiannopoulos’ intolerant platform.

The university has been under scrutiny from both Yiannopoulos and President Donald Trump. Trump tweeted “If U.C. Berkeley does not allow free speech and practices violence on innocent people with a different point of view – NO FEDERAL FUNDS?” Yiannopoulos also disapproved of the cancelation, suggesting the hard left has become “so utterly antithetical to free speech in the last few years.”

If U.C. Berkeley does not allow free speech and practices violence on innocent people with a different point of view – NO FEDERAL FUNDS?

Similar reproaches were expressed here at the University of Wisconsin in response to a UW student who sought to establish an “alt-right” movement on campus. In a meeting with the Associated Students of Madison shared governance committee, UW Chancellor Rebecca Blank continued to stand with “freedom of speech,” saying that unless violence was mentioned, the student was allowed to speak freely.

In the past, free speech was a label for defense of political freedom of expression. That label was necessary and important. Americans pride themselves on being able to openly express opinions of opposition. But should Yiannopoulos’ dissent for minority groups and the white nationalist sentiments of the American Freedom Party really be considered political opinions? The answer is no. 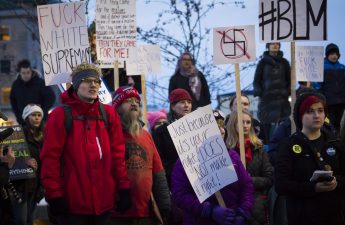 UW student halts plan to bring ‘alt-right’ movement to campusAfter strong opposition from both the administration and student body, University of Wisconsin student Daniel Dropik will not be pursuing Read…

In today’s polarized political climate, free speech has been misused to justify positions that have long been considered unacceptable in American society.

As Marwick wrote, “aggressive [online] speech … positions sexism, racism and anti-semitism (and so forth) as issues of freedom of expression rather than structural oppression.” There is plenty of room for debate within America’s political forum, but as we continue to progress as a country, it’s crucial we stop using free speech as a tool for the perpetuation of oppression.

Gianina Dinon ([email protected]) is a sophomore whose major is currently undeclared.