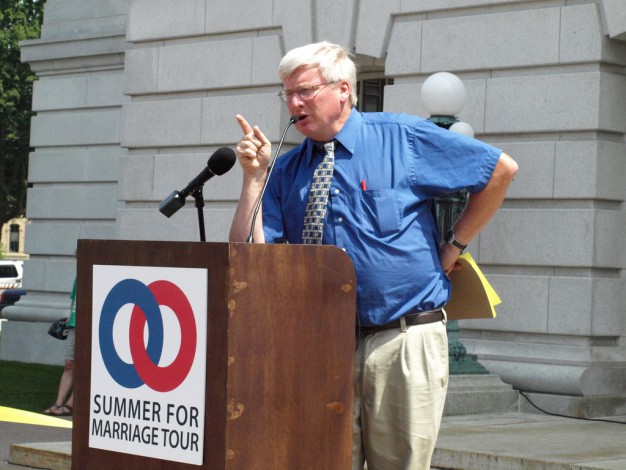 Looks like U.S. Rep.-elect Glenn Grothman, R-Campbellsport is the gift that keeps on giving. Grothman has a healthy list of previous controversies, including making headlines for claiming Kwanzaa was a made up holiday in 2012.

Grothman came out with his latest controversial statement last month in an interview with “UpFront with Mike Gousha” while discussing welfare reform. His comments illuminate his fundamental disconnect with reality and his indifference to the struggle of millions of Americans to survive in what is, in essence, a new Gilded Age where social problems are dealt with superficially, if at all.

Criticizing welfare is nothing new for Grothman. During his congressional campaign last June, Grothman criticized America’s welfare system. He said, “The current welfare system is destroying families and trapping an entire generation in poverty, which is having a devastating impact on our country’s moral and social fabric.” He also added that, “Not only are these programs punishing marriage, but they are also so overly generous people actually want to be on them.” Last month on “UpFront with Mike Gousha,” Grothman doubled down on his previous statements regarding America’s welfare system. He described current welfare programs as “a bribe not to work that hard or a bribe not to marry someone with a full-time job.”

Grothman’s claims regarding welfare programs and recipients, as well as the assumptions underlying them, are unsubstantiated and factually incorrect. First, Grothman incorrectly assumes that welfare recipients somehow either don’t work or don’t want to work. In reality, many recipients of welfare are working citizens. As Stacy Dean, vice president for Food Assistance Policy of the nonpartisan Center on Budget and Policy Priorities, noted in 2012, “A large and growing share of [Supplemental Nutrition Assistance Program] households are working households.” In fact, according to 2010 data from U.S. Department of Agriculture, only 13.2 percent of households with children receiving SNAP benefits had no working adults. The number of working households on welfare has steadily increased since 1990. Furthermore, a report from CBS Charlotte’s Nichole Jaworski stated, “The majority of people who are on welfare are able-bodied and want to work, however they can not find stable employment. Still, many work irregular, low-wage jobs in between receiving welfare.”

Second, Grothman has no concrete evidence to support his assertion that welfare program benefits operate as “a bribe not to work that hard.” As the majority of households that receive welfare benefits are employed, the reason an employed person receives welfare benefits is self-evident: a continued lack of sufficient income to make ends meet. A person could be an extremely hard-working employee in a low-wage position and still not make enough money to afford the necessities of life. Earning insufficient income to be economically self-sufficient does not occur because of a lack of effort; rather, it is the result of imperfect market conditions. No one enjoys living in poverty and, as a result, receiving welfare benefits. But the image of lazy freeloaders happily feeding off the state is exactly what Grothman’s statements imply.

Lastly, in asserting that welfare programs are “trapping an entire generation in poverty,” Grothman misses the real culprit of poverty in the United States: a dysfunctional economic and political system that is increasingly dominated by large for-profit corporations, whose interests are opposed to average citizens. This country lacks a single-payer universal healthcare system, tuition-free higher education and a living wage because of the disproportionate influence of wealthy corporations and individuals. As professors Martin Gilens and Benjamin I. Page conclude in a recent study about the United States, “The central point that emerges from our research is that economic elites and organized groups representing business interests have substantial independent impacts on U.S. government policy, while mass-based interest groups and average citizens have little or no independent influence.” Thus, in arguing that welfare programs are “trapping an entire generation in poverty,” Grothman masquerades reality and chains himself in a veil of ignorance.

Grothman’s ignorant and harmful statements regarding welfare programs and welfare recipients are, unfortunately, unlikely to be his last statements that don’t align with reality.