April 1, Public Health Madison & Dane County and the Madison Police Department issued a public health alert due to an increase in drug-involved overdoses in Dane County.

According to the City of Madison website, at least four people overdosed within 24 hours before April 1, 2021. At least two of the overdoses were fatal.

Officers responded to a residence on the Eastside at 12:22 a.m. April 1 for a heroin overdose, according to the chief’s office blog. A 48-year-old female was located deceased and two male subjects were experiencing drug overdoses and had to be revived with Naloxone.

According to the blog, both men were cited for possession of heroin. One of the suspects was referred to the Madison Area Addiction Recovery Initiative. The autopsy of the deceased individual is currently pending.

Later that day, officers responded to a residence in Madison’s Eastern District where a family member found the subject, a 20-year-old female, deceased from an apparent drug overdose.

Though the cause of the spike is unknown, it is possible the illicit street drugs in the community changed because strong opioids are often unknowingly added into the illicit drug supply, according to the City of Madison website.

“Through Public Health’s syringe service program, individuals who use drugs and/or have family members or friends who use drugs can come to our office on East Washington Street and get access to injectable Naloxone and nasal Narcan,” Johnson said.

According to the Wisconsin Department of Health Services, Narcan, also known as Naloxone, is a medication designed reverse an opioid overdose by blocking the effects of the drug on the body.

PHM&DC will be expanding the syringe service program to their South Park Street office, where they are currently offering community-based overdose education and training events, Johnson said.

According to University of Wisconsin assistant professor of pharmacy and expert on addiction, abused drugs and naloxone Cody Wenthur, the nasal spray is available without a prescription in pharmacies across the state, including some vending machines distributed around the Madison area.

A map of Naloxone availability in Wisconsin pharmacies can be found at the Wisconsin Department of Health Services website.

Wenthur said a spike in overdoses could be linked to synthetic analogs.

“In previous instances where there has been a rapid increase in the number of overdoses in a short period of time, this has been linked to adulteration of the drugs’ supply with synthetic analogs of drugs,” Wenthur said.

According to the New York State Department of Health, analogs are synthetic drugs with properties and effects similar to a known hallucinogen or narcotic but having a slightly altered chemical structure. 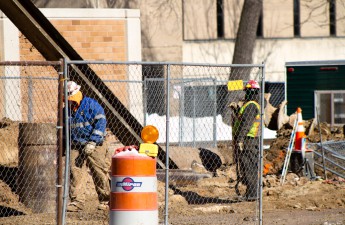 Wenthur said the most common adulterants in the opioid supply are analogs of fentanyl, which is an extremely potent opioid drug itself.

Fentanyl is a synthetic opioid, approved for treating severe pain, according to the CDC. It is often mixed with heroin because it is cheaper to make heroin cut with fentanyl.

Wenthur said the most common explanation provided as to why fentanyl is entering the heroin supply is an economic one.

“Because fentanyl and analogs like carfentanil are so potent, very little of them needs to be introduced into the supply in order to create a pharmacologic effect,” Wenthur said.

Because these substances are extremely potent, only a small amount is required before the substance becomes fatal.

Johnson said, PHM&DC is somewhat able to predict when there will be a surge of fentanyl-laced heroin overdoses in Madison and Dane County.

“We know a majority of our drugs come up from Chicago or even over from Milwaukee,” Johnson said. “If we see spikes and overdoses happening in those areas, sometimes we can anticipate what’s coming down our drug trafficking routes.”

Johnson said the City of Madison encourages its community members to recognize signs of an overdose, such as pale, sweaty or clammy skin, lips or fingertips turning blue, slow or irregular breathing and difficulty or the inability to wake.