This Friday, Gov. Tony Evers announced that his upcoming budget proposal will include a plan for individual counties and cities to raise their sales tax.

According to a press release, Evers’ 2021-23 biennial budget proposal will include a path for certain counties to add an additional 0.5% sales tax to Wisconsin’s statewide sales tax.

The state of Wisconsin currently has a 5% sales tax. Under Evers’ proposal, counties could impose an additional 0.5% sales tax on top of the statewide 5% tax if local residents support and approve the increase with a referendum.

Additionally, cities with populations greater than 30,000 could impose an additional 0.5% sales tax, according to the press release. Counties that meet these criteria and accept both parts of the proposal could raise their local sales tax to 6.5%, according to WHBL reporting.

“From the unexpected costs of the COVID-19 pandemic to the years of neglect and underfunding from the state, communities across Wisconsin have been under immense budgetary pressure, and they’ve been doing more with less for far too long,” Evers said in the press release. “Our proposal puts the question back in the hands of the folks best positioned to make decisions for their community — local leaders and the people who live there.”

Professor of Public Affairs and Applied Economics Andrew Reschovsky said in an email to The Badger Herald that local governments in Wisconsin rely heavily on property taxes for revenue.

Reschovsky said the revenue needs of local governments are rising, partially because public service demands are increasing to meet challenges spurred on by COVID-19 as overall tax revenue drops due to the resulting pandemic-related recession. 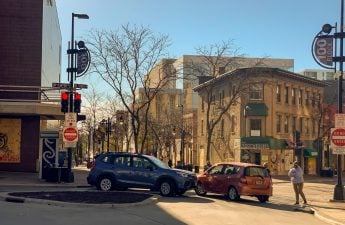 Because of these pandemic-related challenges, Reschovsky said there may be downward pressure on property tax revenues due to factors such as closing businesses and widespread working from home.

The limits on property taxes have created a need to raise sales taxes, and the increased sales tax would help collect the revenue needed to address the pandemic-related deficits, Reschovsky said.

“The pandemic has increased both the public service responsibilities of municipal and county governments and in many cases raised the costs of providing services,” Reschovsky said in the statement. “Public-health related services (contact tracing, vaccination) place new demands on local government.”

But in order for local governments to have the option to increase their sales tax, the Wisconsin Legislature first needs to approve the governor’s proposal. Evers will propose his budget to the Republican-led legislature on Tuesday.

There are certain consequences that local governments need to consider before approving a sales tax referendum, Reschovsky said.

“One potential danger with enacting a local sales tax is that consumers will choose to do their shopping in neighboring communities that have not enacted a local sales tax,” Reschovsky said in the statement. “This issue is most important in small municipalities, where it may be relatively easy for local residents to alter their shopping patterns.”

While the sales tax proposal could be beneficial for local governments to raise needed funds, Reschovsky said it may not be easy to pass.

“While a good case can be made for allowing local governments the ability to diversify their mix of taxes, given anti-tax sentiment in the state legislature, I suspect there will be nothing easy or quick about gaining approval of the governor’s proposal,” Reschovsky said in the email.

UPDATE: This article was updated on Feb. 17 at 6:40 p.m. to correct terminology surrounding Reschovsky’s commentary on the impacts of COVID-19 on local governments’ tax revenue and the logistics of property taxes in Wisconsin after clarification from the source.