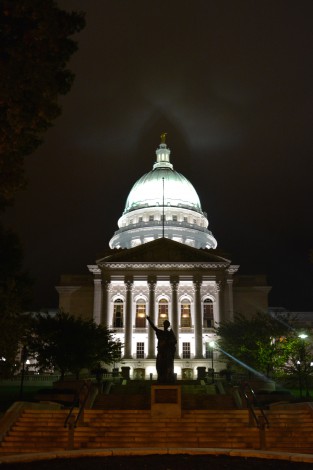 The Wisconsin Assembly voted today in favor of repealing the statewide mask mandate, despite bipartisan opposition and opposition from over 60 registered business and healthcare organizations.

Republicans, who control both the legislative chambers, assert that Evers exceeded his executive power by declaring multiple public health emergencies instead of allowing the Wisconsin Legislature to vote to extend the measures after 60 days, according to the Associated Press.

Rep. John Macco, R-Ledgeview, said in a press release there must be a balance between legislative and executive powers.

“Just as we cannot pass legislation into law without the Governor’s signature, Gov. Evers cannot extend his own emergency powers without approval by the Legislature,” Macco said.

This vote comes after a one week pause in the Assembly. According to the Wisconsin State Journal, repealing the public health measure would result in a loss of $49.3 million in federal food stamp funding for the state.

In response, today the Assembly passed an additional bill designed to maintain federal funding and ensure benefits for approximately 243,000 low-income Wisconsin residents, according to WSAW.

Evers said in a video message politics should not play a part in health.

“Wearing a mask is the most basic thing we can do to keep each other safe,” Evers said. “If the Legislature keeps playing politics and we don’t keep wearing masks, we’re going to see more preventable deaths, and it’s going to take even longer to get our state and our economy back on track.”

In the order, Evers also said new strains of COVID-19 pose additional threats to the state.

Rep. Gordon Hintz, D-Oshkosh, said Democrats will continue to fight to protect Wisconsinites from these strains.

“COVID-19 does not respect county lines, and in order to best fight the pandemic, we need a statewide approach,” Agard said.

Though multiple counties in Wisconsin have local mask mandates in place, Democratic senators such as Sen. Janet Bewley, D-Mason, worry that repealing the statewide mandate will have devastating effects on the health of Wisconsin residents.

“Ending the mask mandate in Wisconsin is tragic and will only lead to more illness and loss of life for Wisconsinites,” Bewley said.