Expecting a decline in traditionally-aged undergraduate students, the UW Extended Campus plans to double online student enrollment within the next five years. This comes despite failing to fulfill Gov. Scott Walker’s 2017 mandate that they double their Flexible Options program.

According to the Director of UW Extended Campus Aaron Brower, the Extended Campus would increase enrollment by marketing, supporting and reevaluating current online degree programs. Brower acknowledged the plan was partially in response to a projected decline in undergraduate students. But, the primary reason Extended Campus wanted to double its online enrollment was to serve working adults.

“The reason we’re doing what we’re doing is mostly to serve an underserved segment of the state, which is adult learners,” Brower said. “It also is the case that the number of traditionally-aged students will decline because of the population trends in the state — just because there’s fewer high-school-aged kids. So that number is declining and there’s a big underserved population for adults.”

The Extended Campus does not actually develop online programs nor grant degrees, Brower said. Their role was to manage the programs and provide student support functions. Brower said one thing distinguishing the Extended Campus from other online degree programs was their UW Flexible Option. It is a “competency-based” degree rather semester-based, which means students advance their own pace by completing projects, according to Brower.

UW System receives grant to support adult learnersThe University of Wisconsin System was awarded a $450,000 grant from the Lumina Foundation to expand opportunities for adult learners.  The Read…

“When that proposal was made in the budget in 2017, I was actually quoted in the paper to say that every program takes about one million [dollars] to create — whether it’s flex or any other program — and about 18 months for a program to create,” Brower said. “So we have the capacity to be on our growth plan. If you want it to be different, then there’s going to have to be more money.”

“What is the role of the UW Extended Campus?” Radomski said. “It will become increasingly redundant.” 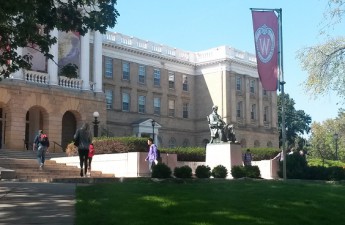 “I’m not saying collaboration’s a bad thing,” Radomski said. “I’m just saying if you want to make things quick and quality, do it where everyone’s at. [It’s] Much faster, higher quality, more efficient and more effective.”

Radomski also questioned the widely-held assumption of declining undergraduate enrollments being caused by fewer high-school graduates. Radomski said though the numbers of white high-school students were decreasing, the number of Latinx students were on the rise, which was where UW campuses needed to recruit.

Radomski said traditional recruiting strategies would not be as effective on Latinx students — many of whom would be the first in their families to attend college — and pointed to UW-Milwaukee’s success in hiring Spanish-speaking staff and talking to local community leaders as a way forward.

“This whole myth that enrollment is going down and woe is me … it’s really bad business,” Radomski said. “And if you’re in business, and you have the issues — collect data! Take a more data-driven, business approach as opposed to excuses. The current narrative that demography is destiny is not true.”

But in a dynamic world of new technologies, new competition and new jobs, both Radomski and Brower said online degrees would help working adults.

“The most important thing is that we know that people do need higher-level education throughout their entire lives,” Brower said. “And these programs are fantastic ways to take advantage of a high-quality UW education in ways that fit into your busy life, rather than forcing you to fit your life around a traditional academic schedule.”