Tuesday, the University of Wisconsin updated their graduate student working policies to include guidelines for Research Assistants.

The Graduate Assistantship Policies and Procedures previously applied only to Teaching Assistants and Project Assistants. The new revision includes Research Assistants and it better defines the details of their appointment.

According to the updated GAPP, a part-time research assistant shouldn’t be required to work more than 40 hours a week. This is language the UW Teaching Assistant Association says they’ve pushed hard to integrate. 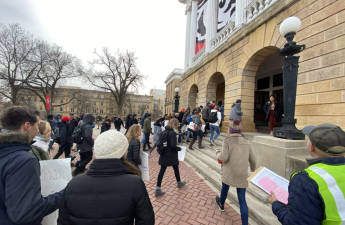 Co-chair of the TAA’s publicity committee Anna Meier said updating the GAPP is a great step for the university, but she also said it’s a little frustrating how slowly the TAA’s get integrated.

Meier said the TAA has pushed for these and similar changes for about three years now, and met with the university for a year and a half to hash out the policies. Meier said the university passed their own version of the policy anyways, despite the work they put in to meet with officials.

“It really doesn’t engender any faith in the administration, that they’re ever going to listen to us, or take us seriously going forward,” Meier said.

In a statement to the Herald, University Communications Director Meredith McGlone said they’ve worked for years to develop this policy. McGlone said throughout this process, they’ve made efforts to listen and support graduate students.

“These policies are the culmination of a very serious two-year effort to listen and take action to support graduate students and clarify workplace expectations,” McGlone said.

The GAPP says RA hours are flexible, depending on the work necessary in each position, so it’s hard to determine a general hourly limit. It says RAs should discuss their position with their supervisor.

In a statement to The Herald, Dean of the Graduate School William Karpus said GAPP makes important distinctions in RA policy, while also describing benefits, insurance and other protections.

“The release of the updated GAPP document that includes policy for Research Assistants is an important and positive change for our campus,” Karpus said. “It successfully formalizes practices that were already established at UW-Madison, and offers guidance and transparency for RAs and their supervisors.”

Meier said many research assistants have felt they have to work 40 hours to get protections, even as part time employees often make salaries around or below $20,000.

In 2016, a Research Assistant in the Electrical Engineering Department named John Brady died by suicide after feeling overworked by a “hostile” research mentor named Akbar Sayeed. As the Wisconsin State Journal reported last year, Brady felt like his concerns weren’t taken seriously by the university. Brady’s death led to discussions across campus and a protest organized by graduate student workers.

UW has taken action to address bias and working conditions since Brady’s death, both at the university and departmental level. Meier said that while most graduate assistants don’t experience working conditions that extreme, smaller, day-to-day disturbances can have a big impact on the workload and mental health of graduates who don’t make very much money.

Meier said the TAA has seen a surge in interest since the last year. They’ve organized more protests and similar events which have gained traction across campus.

“I think we’ve seen a real surge and interest and enthusiasm and an element among graduate workers over the past year,” Meier said. “And that really comes down to becoming a lot more visible and involved on campus and doing a lot more major events.” 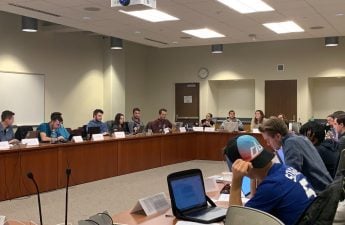 Meier said they hold these events not only to gain more interest from other students, but also to put a different kind of pressure on the university, since the TAA doesn’t feel like UW always listens — though Meier said they’re not legally obligated to listen, either.

Meier said rallies act as another strategic tool for them, though one they feel obligated to rely on when talks with the university aren’t successful.

“Those sorts of big rallying-type events are really what’s left for us, in terms of strategy, when we’re not invited to sit down and talk, or we do and we don’t feel like we’re actually being listened to,” Meier said. “I think it’s made it a lot harder for the administration to ignore us, or at least to ignore us as much.”

Karpus said he appreciates the dedication of the TAA in supporting their peers.

“I appreciate the dedication and collaboration of the work group, which included graduate students, staff and faculty from across campus, in developing this document,” Karpus said.