Beto O’Rourke, the unsuccessful 2018 Democratic candidate for U.S. Senate who is now being closely watched for a possible 2020 presidential run, visited the the University of Wisconsin Friday night to discuss key issues and answer questions in a student-only event.

The visit, which was organized by the Political Science Student Association, is one of O’Rourke’s many stops as he tours the country. When asked if he would be running in the 2020 Democratic presidential primary, O’Rourke said he is “definitely thinking about it.”

O’Rourke explained that he chose to include UW on his tour because he wanted to hear from the students of this “storied, historic university.”

“I have found in the college campuses I have visited that the most challenging questions come up, the best solutions are offered not by me, but by the people who are sitting here,” O’Rourke said. “Students who have … a greater vested interest in the outcome because they will be living with it longer than I will.”

The issues he addressed throughout the evening included climate change, corporate influence in Congress and immigration.

O’Rourke also discussed the border wall built in his home town of El Paso, Texas. He explained that while there are legitimate concerns of safety at the border, supporting border patrol and investing in infrastructure and technology at our ports of entry would be more effective and efficient solutions than building a wall.

“That border wall demonstrably made us less, not more safe,” O’Rourke said. “So if the wall didn’t make us safer — if it cost a lot of money to maintain, if it cuts us off from parts of our community, from our land, from our water supply — then it serves no real purpose and it should come down.”

O’Rourke added that El Paso was often left out of discussions about immigration, even though it disproportionately affects that community considering its location along the southern border. O’Rourke explained that coming from a town that often felt like a “forgotten place” influenced his decision to visit Wisconsin. 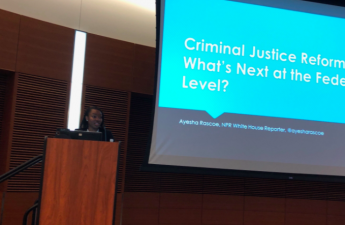 O’Rourke said he wants to prioritize states that have traditionally been overlooked by politicians because he wants to make sure “everyone is involved in the conversation of the future of this country.” O’Rourke went on to say that he wants to listen to everyone, particularly student voices, because that is what will help him determine how to best help the country.

“The very toughest decisions and choices are being made by young people, and they’re forcing a national conversation we would not otherwise have,” O’Rourke said. “This is where the action and the leadership are at this moment and that’s where I want to be.”

The event was so well attended that overflow rooms were provided for students unable to get tickets. O’Rourke greeted and took a photo with every student in attendance, including those in the overflow rooms.

He ended the evening by saying that the questions UW students asked left him feeling optimistic for the future of the country.

“It did not disappoint. Every question was a challenging one — not to me personally, but for the country,” O’Rourke said. “[I am] leaving very excited and energized by the people who were here.”