With only two weeks until the 2018 midterm election, a panel of University of Wisconsin political science professors composed a panel to discuss possible outcomes of the midterm elections.

Professors David Canon, Eleanor Powell, Ryan Owens and Barry Burden each have a unique area of study in the field of political science and brought their own perspectives to the panel.

Canon, whose area of study focuses on Congress, pointed out a YouGov poll from 2014 that showed young people believe one should not vote if they are not informed. As people get older, this belief decreases.

“There’s a very strong relationship between partisanship and voting … This is what political scientists call a heuristic,” Canon said. “A basic shortcut to give you an informed basis for voting just on one piece of information: ‘Is the person a Democrat or Republican?’ And just based on that one bit of information you can have a lot of knowledge about where the candidate stands.” 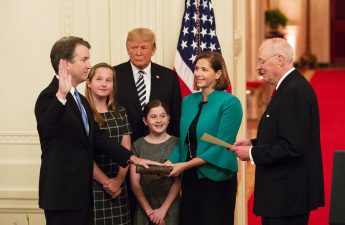 According to Powell, whose area of expertise is campaign finance, this election is on track to be the most expensive midterm election in history, with Democrats raising significantly more money than Republicans.

Owens pointed out that there are four main portions of the American constituency to think about in this election: anti-Trump people, pro-Trump people, moderates and conservatives. The two former groups are very energized and are likely to turn out, while the latter two are more questionable.

“Trump’s really not a conservative and I think there are a lot of conservatives who are very uncomfortable with Trump,” Owens said. “Now, the reason most of them voted for him last time around is because of the Supreme Court. A lot of people who are conservative in principle went to the polls, they plugged their noses, they voted for Trump because they were concerned about what a Supreme Court would look like under a President Clinton.”

Owens, whose area of study is centered around the Supreme Court, added that he does not believe we will see Roe v. Wade struck down, a common concern among Democratic voters.

On average, there is a loss of 26 seats in the House of Representatives and four seats in the Senate, Burden said.

“We would’ve known the day Donald Trump was elected that his party would be losing seats in 2018, not because he’s Donald Trump, but because there’s an ‘R’ by his name,” Burden said.