In an effort to include considerations of equity in future decisions, The Dane County Board of Supervisors met Thursday to discuss the inclusion of equity questions into their legislation.

According to the resolution, the current equity plan consists of five goals:

In particular, the goal for the resolution voted Thursday was to discuss on their fourth goal — to incorporate equity into the committee agenda and budgets.

Sup. Tim Kiefer, District 25, proposed an amendment to the resolution which would add a focus of whether equity considerations are a good use of taxpayer money.

“I believe that this this question is an important equity question that should be included in the template,” Kiefer said. “The majority of decisions we make on this board involve spending or not spending taxpayer money.”

Many supervisors, however, took issue with Kiefer’s comments and believed equity should not be assigned monetary value. Among them was Sup. Carousel Bayrd, District 8, who said the question would only defer women and people of color from participating in the board meetings.

“I think that the introduction of this amendment is one of the illustrations of why we need more people of color and women on the Dane County Board,” Bayrd said. “This decision is an important issue, it is so important to so many people on this board and in the community and to put a financial burden on it, would undermine the equity analysis. I will be voting no.” 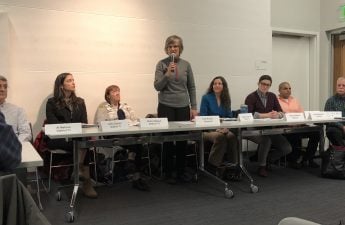 Sup. Sheila Stubbs, District 23, also opposed the amendment. She said she had never been disrespected in a way which put cost before an issue of equity. She believed putting a monetary question into the mix would not allow the purpose of the resolution to show.