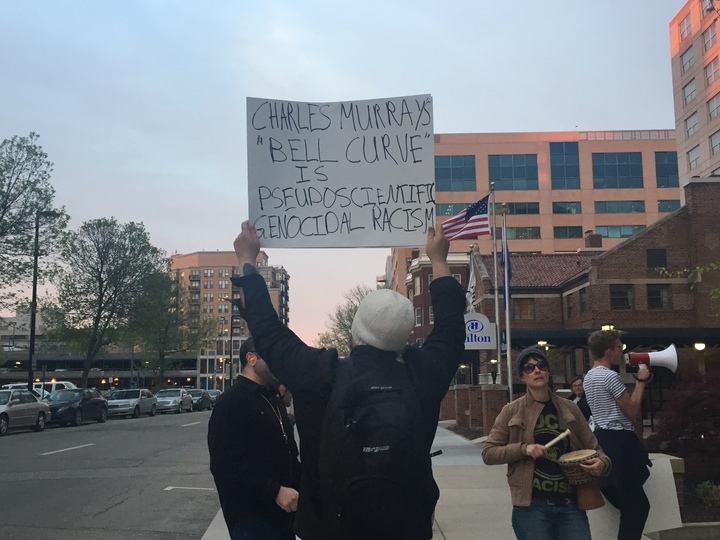 When libertarian Charles Murray arrived at the Madison Club Wednesday to give a lecture on his most recent book, he was met with community and campus protesters shouting for him to “get out of [their] city.”

The Student Coalition for Progress held a protest against Murray outside of the Madison Club. Protesters brought airhorns, megaphones and wind instruments to interrupt the speech.

University of Wisconsin’s Center for the Study of Liberal Democracy welcomed Murray as part of their first annual “Disinvited Dinner,” in which they “re-offer a podium” to individuals who have been met with dissent.

Murray is most famous for his controversial book, “The Bell Curve,” which says society should let inequality persist because it’s a natural phenomenon. “The Bell Curve” also articulates that IQ shapes America’s class structure.

This is not the first campus where Murray has faced contention. Last Saturday, Murray was met with violent protesters at Middlebury College in Vermont.

CSLD said they brought Murray to campus because they wanted to reaffirm First Amendment principles and the importance of academic freedom.

Outside the Madison Club, protesters chanted about how Murray’s rhetoric is classist, racist, homophobic, transphobic and sexist.

Moreover, protesters shouted things like, “This is our university, fuck white supremacy!”

.@BadgerHerald Protesters shout “get the Charles out of Madison, your hate is not welcome here” pic.twitter.com/2dTsP1i0QV

Other protesters shouted, “Eugenics is not science,” referring to his widely contested ideology.

The protesters also continually used noisemakers to signify that UW and the Madison community believe it’s not OK to bring speakers with hateful rhetoric to campus, Ben Klug, a UW special student, said.

Klug also handed out flyers that disputed the claims made in Murray’s book with empirical evidence.

“Murray’s main sources for “The Bell Curve” include discredited and unsound studies, some performed by outright white supremacists,” Klug said in the flyer. “He cherry-picks sources to support his conclusions, when his method claims to incorporate the best data.”

White supremacists see “The Bell Curve” as validating in a sense that white people use this book to make themselves feel superior to people of color, especially black people, Klug said.

To say inequality is just in American culture, as Murray says in his rhetoric, is “inherently problematic,” UW sophomore Nora Herzog said.

“As we can see, racism, sexism, islamophobia and homophobia are huge factors in creating economic and social inequalities,” Herzog said. “To [claim] someone’s situation, someone’s birthplace, someone’s language … as factors that contribute to the social structure and hierarchy in politics and society … is to ignore the foundation of our society.”

UW junior Cortez de la Cruz II said he came to the protest to speak out against injustices.

When people like Murray come to speak in the Madison community, they spread “hurtful rhetoric,” de la Cruz said.

“There’s many ways that [individuals] can phrase things in order to get people to follow you and spread injustices across,” de la Cruz said. “For example, when Chancellor [Blank] said that incident [with the noose at the UW football game] was a freedom of expression, Charles Murray … will take that and say, ‘Now we’re allowed to do things like that because it is freedom of expression.’”

The protest was held without incident.

The lead organizer of the event denied to comment.