Gov. Scott Walker announced Tuesday his long-anticipated budget proposal for the University of Wisconsin System, which includes a 5 percent decrease for in-state tuition as well as the possibility for students to opt out of segregated fees.

Over the next biennium, Walker said his proposal aims to increase funding for UW System by more than $100 million.

The proposed tuition decrease will be covered by a $35 million general purpose revenue increase for UW System’s bloc grant and will save students around $360 per year. 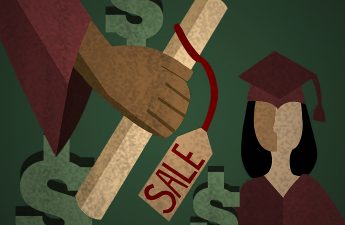 Across the system, university officials have praised Walker’s proposal to decrease tuition for in-state students.

UW Chancellor Rebecca Blank said in a statement she is appreciative of the investments Walker proposed in his budget.

The increase in funding, Blank said, will allow UW to continue their work of giving students a “world-class education.” It will also allow UW to provide opportunities for students to engage in research that has impacts on the economy and well-being of everyday citizens, she said.

UW System President Ray Cross said in a statement Walker’s budget proposal reflects many priorities the system has in their 2020FWD plan.

There are many other proposals in Walker’s budget the Board of Regents will review to assess their impacts on the campus, Blank said.

“I look forward to working with the governor and the Legislature to ensure UW can continue to provide an outstanding educational experience for our students,” Blank said.

Noel Radomski, Wisconsin Center for the Advancement of Postsecondary Education managing director, said the decrease in tuition would help make a portion of college costs more affordable for in-state students.

Many people have worried about the cost of college, Radomski said. He said college costs have risen significantly because of a reduction in state funding and difficulty increasing college productivity.

“Talk to people outside of Dane County and say, ‘What are your concerns about your kids or your grandkids or nieces or nephews going to college in five years or ten years?’ and they’ll say cost,” Radomski said. “And then you’ll say, ‘Well, okay, I froze tuition for the last [budget], now I’m going to freeze tuition for Wisconsin.’ That’s apple pie, how can you not eat that apple pie?”

Over time, tuition for nonresidents and nonresident international students has increased, Radomski said. At the same time, there has been an increase in the number of these students who wish to attend UW.

Tuition may continue to rise for those students, which may impact incoming freshman classes, Radomski said.

Greg Bump, University Relations Specialist at University Communications, said UW currently has to have 3,600 in-state students in the freshmen class.

With the tuition decrease, Radomski said the chancellor may adjust admissions, possibly reducing the number of students admitted from Minnesota since Minnesotans pay a lower tuition under Minnesota-Wisconsin reciprocity.

The chancellor may choose, he added, to admit more nonresident international students since they pay a higher tuition.

Walker’s additional proposal allowing students to opt out of segregated fees, Radomski said, will have a large impact on UW’s Associated Students of Madison and similar organizations at other campuses.

The governor has proposed students will be able to opt out of only the allocable fees, which total around 17 percent of all segregated fees, ASM spokesperson Jason Klein said in an email to The Badger Herald.

ASM’s Student Services Finance Committee Chair Colin Barushok said in a statement the proposal undermines the authority of students in distributing their own fees.

Likewise, Ariela Rivkin, chair of ASM’s Grant Allocation Committee, said in the statement segregated fees are a way of empowering students. Allowing students to opt out would stop that empowerment and “throw it out the window,” she said.

Allowing students to opt out of segregated fees could have a detrimental impact on overall student success, Graham Pearce, chair of UW System Representatives, said in a statement.

Correction: A previous version of this article stated the minimum number of in-state students was 3,200. The Badger Herald regrets this error.