Collins, who was a guest speaker for the Wisconsin Union Directorate’s Distinguished Lecture Series, is best known for being the first female to both pilot and command the NASA shuttle Columbia in 1999. Collins is also recognized as a decorated colonel for the United States Air Force. 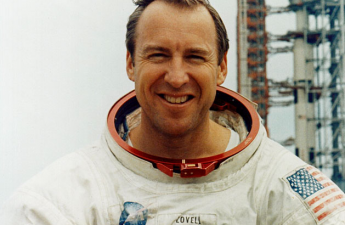 Collins was born in 1956 in Elmira, New York to low-income Irish immigrants to whom she attributes her leadership, work ethic and determination.

“They believed in hard-work, they had good values and they showed us strength in overcoming adversities in their lives,” Collins said. “They encouraged us to be what we wanted to be.”

To achieve her dream of being a pilot, Collins began working at a young age at various jobs to pay for her own flying lessons and college tuition at Syracuse University, Stanford University and finally Webster University where she earned degrees in mathematics, economics, operations research and space systems management.

What was scariest for Collins, though, was going to the local airport during her junior year at Syracuse University and asking them to teach her how to fly.

“It scared me to go up there because I thought they were going to say no because I was a girl, but it didn’t matter to them,” Collins said.

After graduating Syracuse in 1978, Collins was invited to be one of the first four women ever chosen for undergraduate pilot training at Vance Air Force Base, Oklahoma. She completed the course in 1979 and quickly climbed the ladder, eventually becoming the second woman to graduate as a test pilot from the competitive Air Force Test Pilot School in 1990.

In that same year she was selected to be an astronaut for NASA where women were well accepted by that time, Collins said. 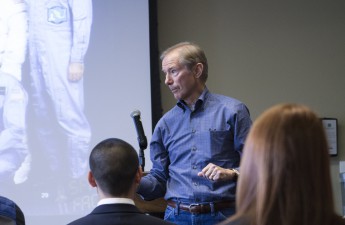 “It was a little bit of challenge, but I thought it was important for me to get the message out,” Collins said. “So accepting as many of those as I could while still trying to keep my crew focused on what we were there for and flying a safe and successful mission.”

Collins shared videos and pictures that detail her successful tenure in space as pilot commander of the shuttle Columbia. Pictures included views of earth from space as well as the astronauts enjoying being without gravity.

Since her retirement from the Air Force in 2005 and from NASA in 2006, Collins was inducted into the National Women’s Hall of Fame in Seneca Falls, New York for her role as the first female commander of the 1999 Columbia mission.

Collins said parents should encourage their kids to set high goals and be imaginative, a trait she reckoned as critical as knowledge is for success.

“Be an explorer and be proud of your achievements,” Collins said. “And remember no one person is exactly the same.”