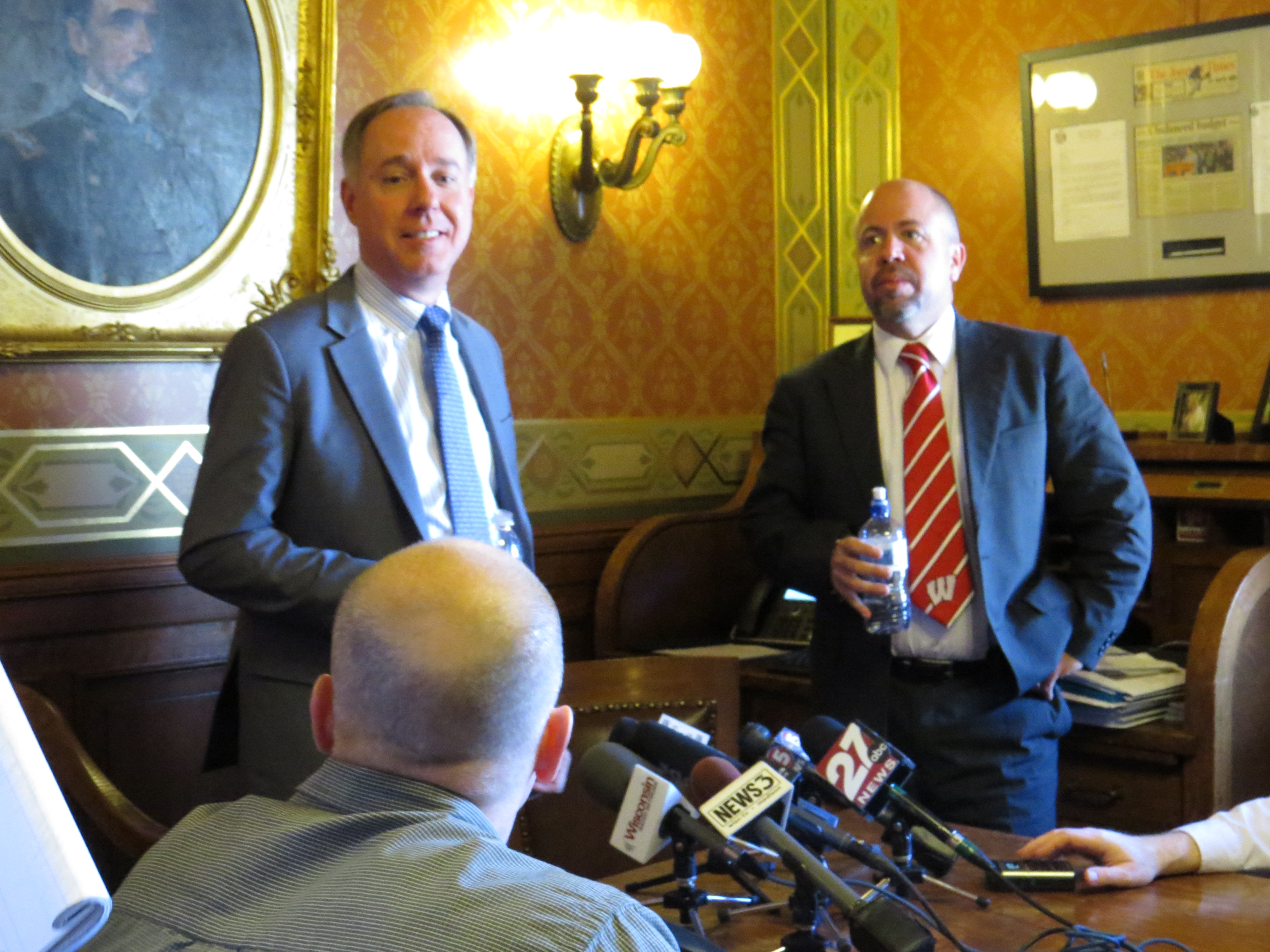 In the wake of Republicans winning their largest majority in the state Assembly since 1956, Assembly Speaker Robin Vos, R-Rochester, and Assembly Majority Leader Rep. Jim Steineke, R-Kaukauna, addressed the changes in government at a press conference Wednesday.

President-elect Donald Trump also made history Tuesday, turning Wisconsin red in a presidential election for the first time since 1984 and astonishing pollsters and pundits by winning the presidency in spite of almost all predictions.

“I understand how difficult days like today are,” Vos said “My thoughts are with them [Democrats] as they go through the times figuring out how they deal with the election, and on our side, as we sit down and figure out what the next two years can look like in Wisconsin.”

After speaking with other leaders in chambers around the country, Vos said he has heard the electorate express frustration with politicians who don’t get things done.

Steineke said he was surprised at constituents’ focus on the “dysfunction in D.C.” over state issues, which Vos said shows a desire for change.

“What people were looking for in this election was elected officials who are going to tell people what they’re going to do and then actually work like crazy to get it done,” Vos said.

Vos attributed Democratic candidate Hillary Clinton’s loss to her inability to inspire people and her image as part of the bureaucracy.

But some Democratic leaders said Clinton’s defeat was more than just a political loss for the party. Wisconsin voters re-elected Democratic Rep. JoCasta Zamparripa to the 8th Assembly district. He said in a statement he will be a “watchdog” and a “fighter.”

“[Trump’s] win strikes a chord of fear in so many members of underrepresented communities, including those I hail from and it is important to try and offer some reassurance to these and all Wisconsinites,” Zamparripa.

Assembly Minority Leader Rep. Peter Barca, D-Kenosha, expressed his discontent for the Republican-dominated results down the ticket in a statement.

“This certainly was a gut-wrenching and surprising election, and our state was swept in a Trump wave that upended the races for President, Congress, State Senate, and the State Assembly,” Barca said

Having Trump on the ticket helped other Republicans on the ballot, Vos said. Excited to potentially see Paul Ryan continue as Speaker of the House, Vos said Wisconsin’s future is “just as bright” as that in Washington D.C.

Vos said he and Steineke took office in 2011 amid similar surprise at such strong support for Republican leadership.

“Since 2011, we have made decisions, one after another, some controversial, many, many bipartisan, to move Wisconsin forward,” Vos said.

Vos said he looks forward to working with the newly elected politicians and advised them to stick to their principles and remember their constituents. Pointing to Trump’s candidacy, Vos said setting a tone for how government should operate is more important than arguing over details.

Concerning health care, Vos said decisions start in Washington D.C. Trump has previously said he would like to completely repeal the Affordable Care Act because of rising costs.

“I think there are a lot of families in the state who are struggling with the cost of insurance,” Vos said.

Some elements of the act would be worth keeping, such as preventing insurance companies from denying coverage based on preexisting conditions, Vos said. But he said the act distorts the market and needs to be changed.

Barca also called for politicians to work together to solve the state’s transportation crisis, fund public schools and grow wages and jobs.

“Here in this state, protecting clean open and transparent government is especially vital at this time of complete one-party control,” Barca said. “Democrats will never cease to be a voice for all people — especially those who woke up this morning feeling alienated and powerless in their own country.”

Vos said he hopes Trump and Ryan work together with Democrats to develop a plan for health care and is most optimistic about Trump’s ability to bring people together to make deals during his presidency.