University of Wisconsin students with campus jobs will no longer be able to work 30 hours per week because of federal law changes under the Affordable Care Act.

Under the ACA, employers need to offer health care benefits to 95 percent of employees who work full-time, which is defined as approximately 30 hours a week, UW spokesperson John Lucas said in an email to The Badger Herald.

To comply with the ACA, UW has adopted a policy that recommends student hours be limited to 25 hours a week. Different departments set rules within these broader campus requirements. What is changing and why?

Brendon Dybdahl, spokesperson for UW Housing, said most students have health insurance already and it would be complicated for the university and the UW System to figure out how to provide healthcare for student employees.

The weekly caps are in place to prevent students from going over the ACA’s annual limit of 1,560 hours, or 30 hours a week for 52 weeks, Dybdahl said. If a student exceeds the ultimate yearly limit, that student can no longer work until the next calendar year, he added.

Since the UW System is a single employer, students with multiple campus jobs across different departments have to stay under the hourly limit for all of their campus jobs combined.

Before the ACA, the only limit in place was that students could not work more than 40 hours a week to prevent being paid overtime, Dybdahl said.

For UW Housing — the biggest student employer on campus with around 2,000 student workers — the weekly limit during the academic year is 29 hours a week rather than the recommended 25, Dybdahl said.

Hannah DePorter, administrative director of F.H. King Students for Sustainable Agriculture, said student employees in her organization have the same 29 hour per week cap, as well as any other organization that is funded through segregated fees the Associated Students of Madison distributes. 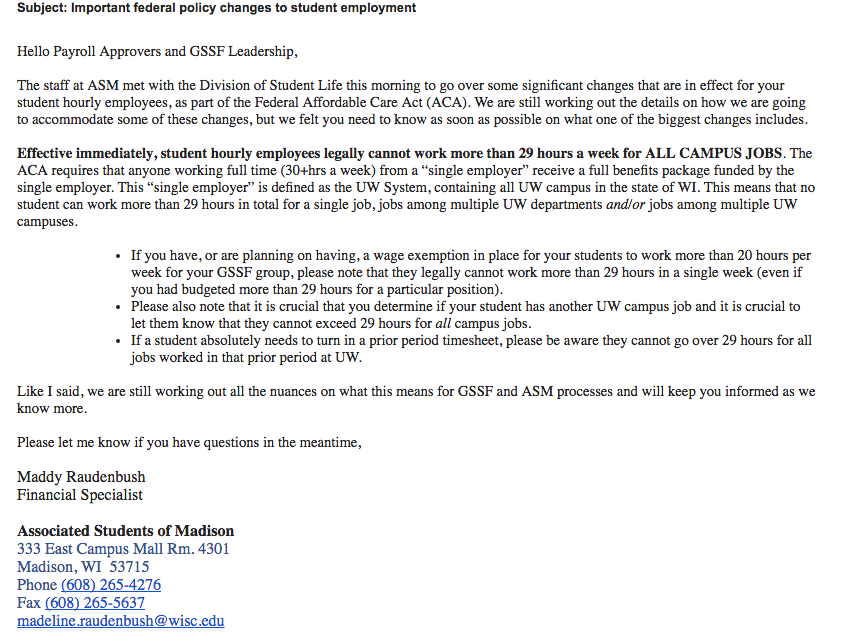 Screen shot of an email obtained by The Badger Herald

Segregated fee funding: who gets whatEvery year, University of Wisconsin students pay part of their tuition to fund student-run organizations. This year, as each student Read…

Other departments for campus jobs include UW Libraries, UW Recreational Sports and the UW Athletic Department. Each set their own hourly limits to comply with the ACA. State Democrats, Republicans are still fighting over ObamacareSix years after the Affordable Care Act was signed into federal law, its impact is still being debated at the Read…

During the summer, some student employees can work more than 30 hours a week depending on the department.

This is why during the summer students can work for up to 40 hours a week for UW Housing, Dybdahl said. Student workers are generally looking for longer hours during the summer, and have more time since they are not in class.

At the Wisconsin Union, student workers can also work up to 40 hours per week during the summer and breaks. The weekly hourly limits are expected to have little impact on most students.

Fewer than 30 UW student employees out of around 15,000 actually worked an average of 30 hours or more during 2015, John Lucas said. House Fellows are a group of student employees who have significant hourly commitments during the week, but Dybdahl said the amount of time they work still fits within the ACA’s requirements. Dybdahl said an audit determined that a House Fellow’s “actively engaged” hours are around 20 hours per week. If a House Fellow wanted to work another campus job, it could only be for nine hours a week.

Dybdahl said the new limits bring the biggest challenges for students who rack up hours at multiple campus jobs across different departments. For UW Housing, tools have been put in place to help supervisors pull up student information to make sure hourly limits are not exceeded.

DePorter said she’s worried students with multiple jobs at the university will have to quit campus jobs to work for other employers. She said many students, including herself, need to work multiple jobs so they can “make a living wage.” DePorter said six F.H. King student employees may be affected, meaning some of their hours would have to be cut.

Dybdahl said during the school year working 30 to 40 hours a week could take too much time away from classes and that students should focus first on their academics.

“We would be concerned if students are working more hours than [29 hours a week] because their first priority should be their academics,” Dybdahl said.