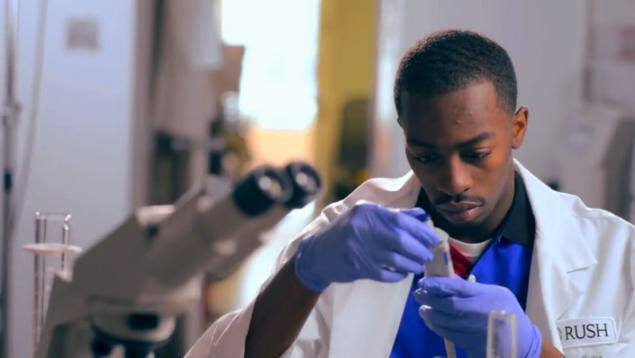 Aside from the TEDx talk he gave, YouTube video channel he created and motivational speeches to his peers, Keven Stonewall is still just a third-year University of Wisconsin student in a lab coat who follows his passion.

Stonewall’s journey into science started during his freshman year of high school, when a friend’s uncle passed away from cancer. After this tragedy, he started thinking about getting serious with his long-lasting passion for science and research.

“That experience kind of sparked the fire, because I thought I had a responsibility, that there’s something I need to do, and I had to step up,” Stonewall said.

As a high school student, Stonewall started writing proposals to different research laboratories with the hope of getting experience before college. When he joined Rush University Medical Center as an intern at the age of 17, he met someone who inspired him greatly.

Carl Ruby, Stonewall’s mentor at Rush University, gave him guidance not only on research, but also on a personal level. He and Stonewall had similar backgrounds as both of them became involved with cancer research at a young age. More importantly, Ruby was the role model who could tell Stonewall to have faith in himself even in difficult times.

“He really gave me the confidence and put the energy in me that I could do anything,” Stonewall said. “He would also bring a positive vibe to the lab. Having his support was really great and meaningful.”

In high school, Stonewall’s research focused on a potential vaccine for colon cancer, which yielded fruitful results. Now, in addition to colon cancer, he is tackling another cancer called neuroblastoma, the most common cancer in infancy, Stonewall said. His ultimate goal, however, is to improve vaccines to cure more kinds of cancer.

Stonewall said he had doubts about embarking on a cancer research path. He said his biggest challenge was jumping directly from high school biology class to university research labs.

“I had an idea of what I wanted to do, but when I started to learn about the real science of it, it was kind of discouraging and I didn’t think I could do it,” Stonewall said.

The medical jargon was hard to follow, and Stonewall said he wasn’t sure he could succeed at the collegiate level. But these obstacles didn’t get him down, because Stonewall believed in the power of passion.

Stonewall said everyone is the author of their own book of life, and every page is a story worth writing about. The difficult times in life are only materials for those stories, he said.

“You’re in face of an obstacle, are you going to let that put you down, or are you going to overcome the obstacle and let that be a great climax of your story?” he said. “When you’re facing a problem, there’s another opportunity for you to make your life great, because you’ve got the climax.”

Finding one’s passion requires a lot of self-reflection, Stonewall said. On his way to finding his passion for science, Stonewall said he learned more about himself and his potential.

He said it’s important to stay true to what he really likes because in his eyes, “passion is love and love is passion,” and that’s a message he wants to transcend to the next generation.

Stonewall gave a TED talk at UW where he introduced his journey in fighting colon cancer. After that, many people from his hometown in Chicago told him that he became a person they look up to, which was extremely meaningful to him.

“I’m not only representing myself — I’m representing my family, my people back home in Chicago, the students here… this is something bigger than myself and this is a blessing,” Stonewall said.“I really love it because it gives me the opportunity to reflect on what I’ve done so far, and it pushed me so much to realize that everything [I do] is for a reason.”