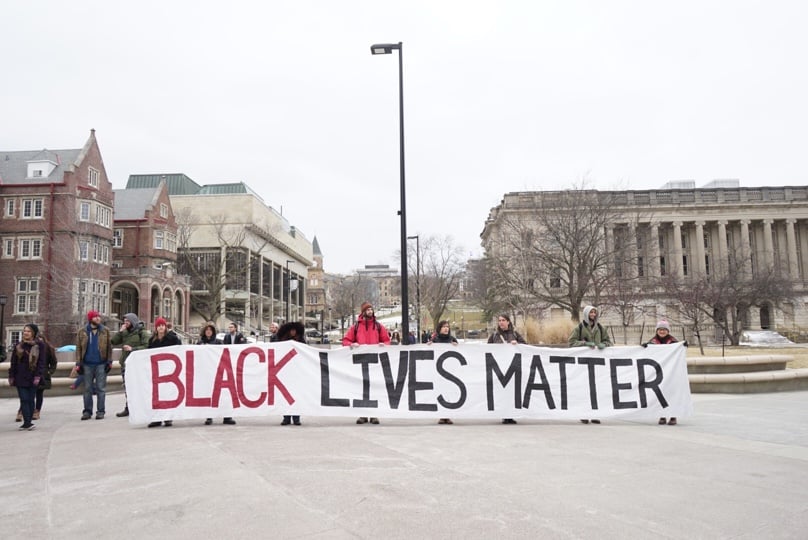 Protesters gathered Friday afternoon to demonstrate in memory of Tony Robinson, who was fatally shot by Madison Police Department Officer Matt Kenny roughly one year ago.

Around 100 protesters assembled on Library Mall and marched up State Street toward the Capitol, stopping at each busy intersection for moments of silence and spirited chants.

Before beginning the march, participants listened to speeches from key figures in Madison’s Young, Gifted and Black Coalition and the UW Blackout Movement. 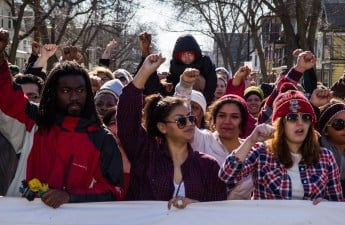 “We are dark; we are melanin,” Kenneth Cole, an organizer from UW Blackout, told the crowd. “But we are strong. We’re here to show those who think they can shoot us down because of our melanin that they’re wrong.”

Demonstrators marched up State Street chanting, “Who did they kill? Tony Robinson,” and “Hey, hey, ho, ho, these killer cops have got to go,” among other refrains.

Traffic congestion ensued at each intersection, and long lines of buses formed on State Street while protesters blocked traffic. MPD officers went from bus to bus briefing drivers on the situation and formed a perimeter between the demonstrators and motorists.

The march culminated in a brief occupation of the Overture Center. Protesters chanted and sang in the performing arts center’s central atrium before hearing speeches.

"Somebody else is going to die and it might be you" – Eric Upchurch advocating for community control over police pic.twitter.com/ITIMe9C5Zd

Explaining the reason for ending the march at the Overture Center, Brandi Grayson, a YGB Coalition co-founder, said the building is symbolic of the city’s “skewed” priorities.

Protesters raised their fists and chanted the word “power” one last time before dispersing shortly after 6 p.m.

Grayson later said the primary goal of the march was to remind the community that Robinson will never be forgotten.