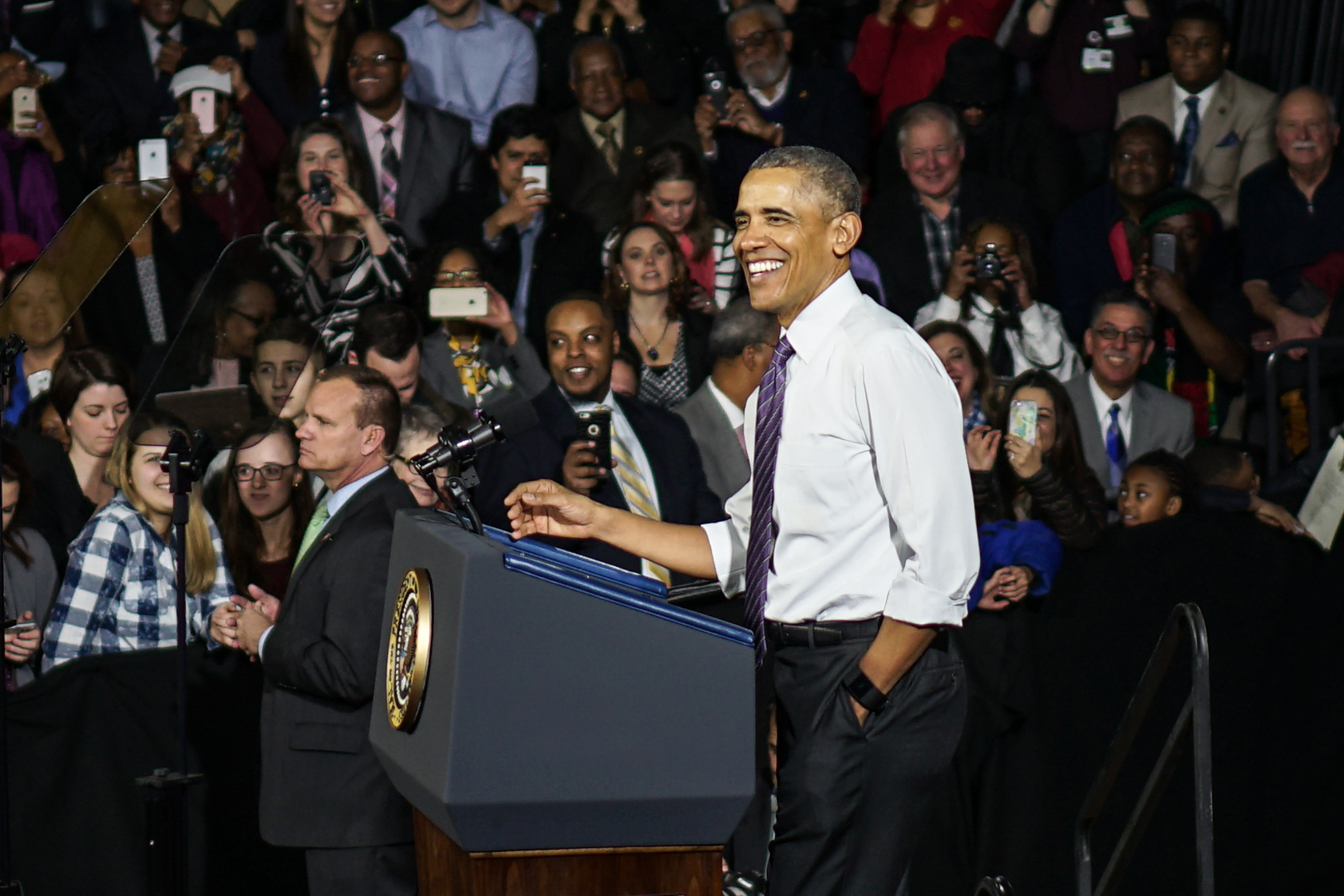 “That’s enough to fill Lambeau Field and still have a big tailgating party with a lot of folks outside,” Obama said. “And those tailgaters wouldn’t have to worry, because Obamacare covers indigestion from too many brats.”

.@POTUS says he's here to congratulate the people of #MKE for signing up almost 90,000 ppl for #aca @BadgerHerald pic.twitter.com/p58kmY63Gn

Before Obama took that stage at the United Community Center, Brent Brown, a self-identified Republican from Mosinee, Wisconsin, stood before the crowd to introduce the president and share his experience with the Affordable Care Act, otherwise know as Obamacare.

Brown, who said he has never voted for Obama, explained how the Affordable Care Act “saved” his life.

Obama praised Brown for sharing his story, and though he won’t be able to swing his vote for future elections, the two “hugged it out” at lunch.

The president said the Affordable Care Act has helped many Americans like Brown with their medical troubles and was quick to call out Republican legislators who have repeatedly called for its repeal.

“Your governor still refuses to expand Medicaid in this state,” he said. “And we could cover another 21,000 Wisconsinites with a stroke of his pen.”

But Wisconsin Republicans were quick to respond.

“The Patient Protection and Affordable Care Act has not lived up to its name in Wisconsin or the rest of America,” Johnson said in a statement.

Johnson continued by saying the Affordable Care Act has driven out a major health insurer out of the field, causing 1,200 Milwaukee residents to loose their jobs.

But Obama said if legislators like Johnson get their way and repeal the act, “millions of working families would see their insurance premiums spike.” He continued by saying even though Republicans have called to repeal the act dozens of times, they have offered no replacement options. Even Brown called on his fellow Republicans to “swallow their pride” and stop their repeal attempts.

Throughout the address, Obama spoke like a true second-term president, cracking jokes and even giving a shout out to the Milwaukee Bucks, who were in attendance.

Obama used this visit to tout the benefits he claims communities have seen from his health care plan.

“So your insurance is better than it was — even if you don’t know it. Even if you didn’t vote for me,” he said. “Thanks, Obama.”