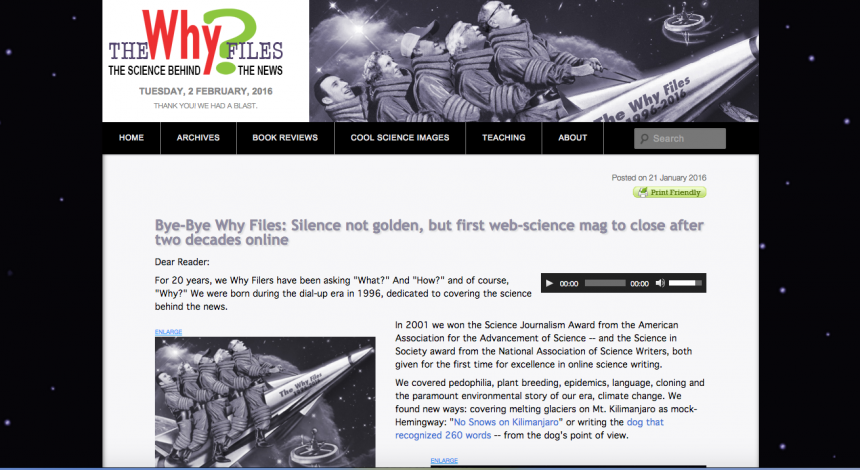 Courtesy of the Why Files

The Why Files, a University of Wisconsin-sponsored online science magazine, will stop answering people’s “whys” after sharing the science behind the news for two decades.

Editors of the webzine issued a farewell post Jan. 21 recapping the magazine’s run over the years, officially putting an end to the first popular web magazine dedicated to science education and communication. 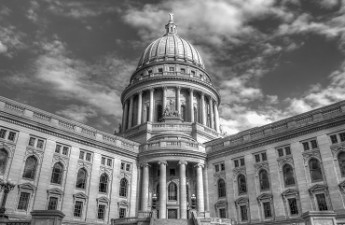 The website started when a large National Science Foundation grant came to a consortium of UW faculty interested in science communication, Sharon Dunwoody, retired professor at the UW School of Journalism and Mass Communication, said.

Dunwoody said the faculty used the money to study how to best educate the American public, and they proposed to create this website to explain the science behind the news as part of the strategy. The scientists involved in the grant then went to the university communication office, Dunwoody said, to look for people to run the magazine.

“It was quite innovative in those days, and again, we were really kind of the guinea pig for that kind of journalism effort,” Dunwoody said.

The NSF grant funded the magazine for its first few years before UW took over. The magazine has since become a resource for people all over the internet to understand the scientific knowledge behind bigger issues, Terry Devitt, Why Files editor and co-founder, said.

The internet was still a new channel in the mid-90s, Devitt said. The university was part of an experiment to see if the web would be an effective vehicle to communicate science to mass audiences. The result was successful, he said.

“We helped pave the way for sharing science through that medium, and we explored its potential because it was different,” Devitt said. “At that time your options were print — things like newspapers and magazines — or broadcast, like radio and television. But the web obviously had different capabilities.”

The magazine focused on looking at news from a scientific angle and explored new ways to help people understand why certain things happen. Instead of solely promoting UW’s scientific research, the editors searched for resources everywhere and interviewed a number of scientists from institutions across the country, Dunwoody said.

For example, the website’s biology archive has one story about how baboons make democratic decisions in a group, a University of California-Davis professor’s research. Devitt said this is one of his favorite stories in the magazine because it captured people’s attention.

“We like to be providing good, well-sourced and accurate information, but also doing it with a little bit of reverence, and a sense of humor,” Devitt said.

As the current director of research communications at UW, Devitt said the Why Files team provided a model that impacted many other programs with similar mission statements. Educators and homeschoolers often use materials on the Why Files.

The magazine’s high-quality posts have boosted UW’s reputation without serving as a public relations arm to the university, Dunwoody said. But since the budget cuts, every unit on campus had to cut down to a “barebones condition,” she said.

Though budget constraints made it impossible to keep the magazine going, Devitt said the site’s past content will be stored in the online archives for another couple of years.

In the meantime, UW will not stop its efforts to make science easily understandable and accessible to the general public, and scientists will find new approaches to carry on the torch.

“It was a fun project,” Devitt said. “We had a very good run. [The] university community was incredibly supportive of our project over time and showed a lot of savvy and smart in investing in it for two decades.”