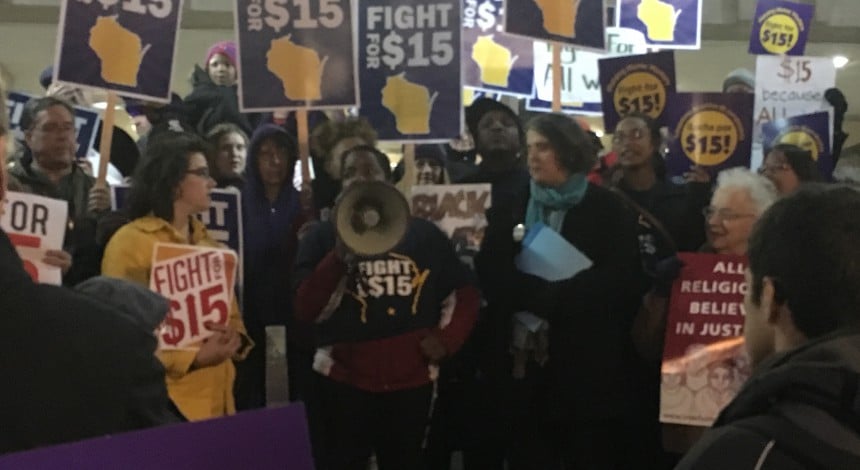 Advocates for the “Fight for 15” movement gathered Tuesday night on the steps of the City County building alongside local and regional officials to support raising the minimum wage to $15 per hour.

The crowd outside the City County building contained people from a variety of positions, including fast food workers, children of minimum wage workers and various elected officials.

The gathered crowd also included several horn players, who provided marching music for the group as they marched in front of the City County building. Protestor’s chanted for “more pay,” followed up by the chant, “I believe that we will win.”

Minimum wage workers with different native languages come together for Fight for 15 movement.

“I think that it’s important that everybody hears what is being said, and what we believe in as people,” Gardner said. “A lot of people out here are making minimum wage, and I really do think that $15 would really help not only me, but everyone else.”

Alongside minimum wage workers, Sargent arrived before the rally, speaking with various individuals also waiting for the event to start before marching with the protestors.

Sargent said she is a long-time supporter of “family-sustaining” wages and the right to form a union. Holding protests like this one helps empower workers to stand up for their rights, Sargent said.

“No one here is saying that they want to live extravagantly,” Sargent said. “In fact, what I am hearing is that what we are simply asking for is an honest day’s pay for an honest day’s work.”