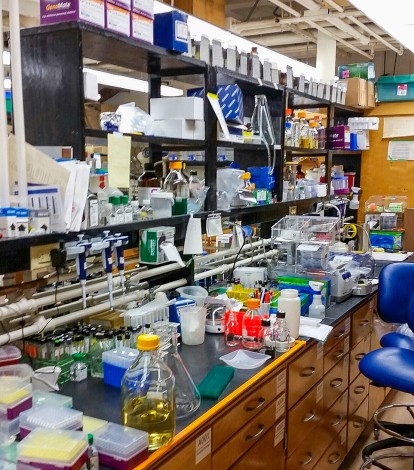 Wisconsin aims to slow the impact of climate change by increasing the number of affordable energy options.

University of Wisconsin chemistry professor Song Jin has developed a catalyst that could replace platinum in chemical reactions. Platinum is widely used to accelerate hydrogen reactions, which Jin believes could be a possible alternative to fossil fuels in the future.

Since the new catalyst doesn’t use any rare metals, it costs about 1,000 times less than platinum, Jin said. But it performs almost as well, making it more economical.

“[Our] catalyst is a lot cheaper than platinum, the performance is still a little less [but it’s] getting quite close which is actually why this is a very interesting and exciting discovery,” Jin said. “We hope this will [be used] in the future when people want to make hydrogen.”

In wide scale production, Jin hopes the catalyst will be used in an electrolyzer to generate hydrogen, or in a reaction which generates hydrogen directly from sunlight.

He said the catalyst is a significant step toward using hydrogen as an alternative to fossil fuels in the future.

“This catalyst will be a small piece of that big puzzle going in to making the hydrogen economy more likely to happen,” Jin said. “The whole idea is that we would like to use hydrogen as a fuel.”

The appeal of using hydrogen as a fuel is that when hydrogen is burned, it produces water instead of greenhouse gases, Jin said. Unfortunately, the hydrogen used for fuel now comes from fossil fuels, he said.

Chris Schultz-Buechner, a spokesperson for the Wisconsin Energy Conservation Corporation, said improving efficiency and affordability of all existing energy sources, not just hydrogen, is integral to reducing carbon emissions.

People are already reducing their need for fossil fuels by increasing energy efficiency, she said. Maintaining a variety of fuel sources, so that the U.S. does not become too focused on one source will be key moving forward, she said.

“I think it’s important to have a variety of options available to people so that we’re not just focused on one type of fuel,” Schultz-Buechner said. “[So that we don’t] just [have] fossil fuels, renewables or hydrogen available.”

The cost of implementing renewable energy has continued to drop since 2010, according to an August 2015 report from the International Energy Agency.

But the initial cost of implementing renewable energy in a person’s home still prevents people who would like to utilize it from doing so, Schultz-Buechner said.