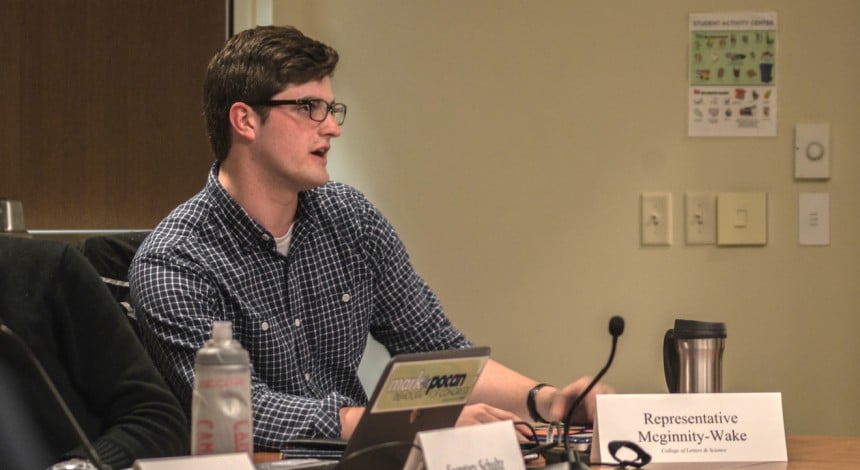 The Associated Students of Madison representatives brainstormed fall semester campaigns and elected the Finance Committee and Sustainability Committee chair at their meeting Tuesday.

One proposal, from Rep. Zach Pravato, would add a required educational program that would inform students on their rights on campus when there are police officers or house fellow in the dorms. It would be similar to the Tonight sexual assault program.

Also Tuesday, Rep. Ariela Rivkin won the spot as chair of the Finance Commitee, beating out Rep. Qi Xi on a 14-3-2 vote.

Rep. August McGinnity-Wake will be the Sustainability Committee chair after beating Jennifer Sharp on a 14-4-2 vote.

Current ASM representatives were nominated first for committee and board appointments.

Rep. Zachary Pravato was nominated and appointed to the Student Services Finance Committee.

Reps. Edward Leonard and Patrick Corpuz were nominated and appointed to the Shared Governance Committee.

Reps. Leland Pan, Garrett Pauli and Daniel Roque were nominated and appointed to the Diversity Committee.

There were no nominations to the SAC Governing Board chair or the Conference Selection Subcommittee. These positions will be filled over the summer or in the fall, ASM Chair Madison Laning said.

Laning suggested new representatives contact deans of their respective colleges and look into potential changes to the different colleges due to the proposed budget cuts over the summer.