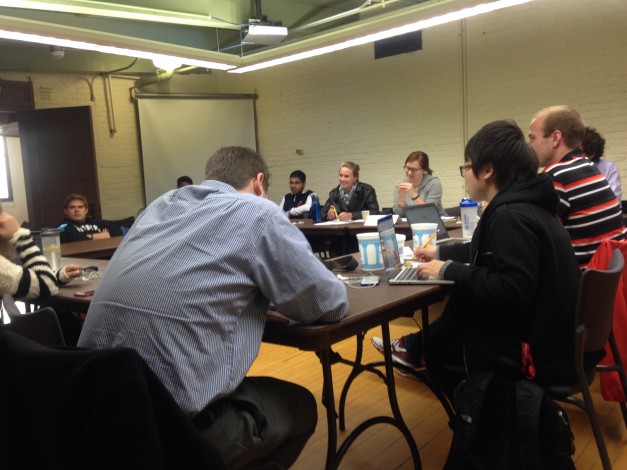 University of Wisconsin’s Student Services Finance Committee approved four pieces of legislation, where the SSFC leaders will no longer receive an additional stipend, at their final meeting of the semester Thursday.

SSFC unanimously passed legislation that states the SSFC chair, vice chair and secretary will no longer receive the member meeting stipend because they already receive stipends out of tuition.

The previous legislation did not explicitly state SSFC leadership was not intended to receive additional member meeting stipends.

The next chair will receive about $1,000 less in income after the member meeting stipend is removed. SSFC leadership should not make more than 100 percent of tuition in income, Chair Devon Maier said.

This was always intended to be the case, he said, but he “wasn’t going to break precedent.”

SSFC passed legislation with a vote of 10-0-1 that stated if a General Student Services Fund group cumulatively spends more than 85 percent of the allocated wage, the chair and vice chair will call a meeting of the ASM Reserve Board to allocate the necessary difference.

GSSF provides funding for registered student organizations, such as Badger Catholic and Sex Out Loud.

Over the past five fiscal years, GSSF wages have been underspent an average of 24.5 percent. Although wages are the most predictable aspect of GSSF budgets, it is difficult for groups to predict staff vacancies due to study abroad trips. GSSF groups budget for full employment although there are often vacancies.

Rep. Jessica Franco-Morales questioned whether this legislation would affect the amount of funds available for GSSF groups.

The legislation is strictly a budget issue and will benefit both SSFC and GSSF groups, Maier said.

SSFC passed legislation with a vote of 11-1-0 that clarified the punishment GSSF groups will receive for a third violation of overpaying their employees. The previous legislation did not clarify who is responsible for paying back the overpaid wages, who will receive the payments and the amount of wages to be paid back.

The legislation states the GSSF group will be held responsible for paying back the wages, the overpaid wages will be returned to the ASM Finance Committee to be put towards grants and the wages to be paid back are only those from the third violation.

SSFC approved a memoranda letter from Maier regarding the Wisconsin Union and the Associated Students of Madison.

The letter was written to seek solutions in the short and long-term and provide framework for collaboration.

In the past, working relations between the Union and ASM have not been as good as they could be, Franco-Morales said.

Franco-Morales voiced her concerns that the letter does not remain only symbolic just next year’s SSFC leadership carries through with improving the relationship between ASM and the Union and work on communication.