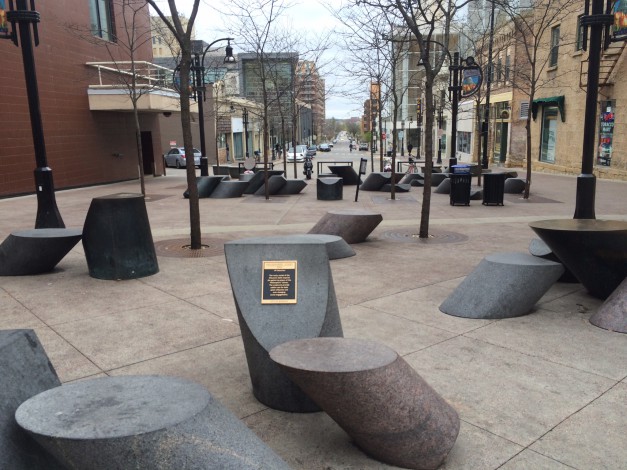 Madison’s City Council will take a look at proposed changes to Philosopher’s Grove Tuesday in efforts to make it more spacious and family friendly after consistent complaints about crime and behavior in the area.

Philosopher’s Grove is on the top of State Street next to Myles Teddywedgers. The area is located on the intersection between West Mifflin and State and contains a number of “philosopher’s stones” and trees.

After continued issues in the area, the city of Madison is looking at remodeling Philosopher’s Grove. Mary Carbine, executive director of Madison’s Central Business Improvement District, said the police have indicated behavior problems in the area, including ongoing drug dealing, public alcohol consumption and fighting.

“It needs to be activated with more of the general public coming into the area and more positive uses and activity,” Carbine said.

Ald. Ledell Zellers, District 2, said the plan is to remove some of the philosopher’s stones in the middle of area to allow a freer circulation of pedestrians between the Capitol, State Street and Madison Public Library. The trees would not be removed, Zellers said.

Along with removing some of the stones, Carbine said there are plans to host small to medium sized activities and events in Philosopher’s Grove. She said this could include participatory arts and craft activities, small scale music and pop-up retail markets.

“We hope that opening up the area with the removal of some of the philosopher’s stones that this will help communicate its character as an important entryway into the downtown,” Carbine said.

Zellers said there are talks of having increased police presence in the area, in addition to the police that are stationed there.

Zellers said the cost of the activities will be around $25,000 from the city of Madison. Removing the philosopher’s stones would cost another $25,000.

Carbine said if the changes are passed by City Council, the plan is to remove the stones by June 1. The activities and events would start in June.

“Obviously things have to come together quite quickly,” Carbine said. “It is a pilot program, but we have had great response from the potential partners in the area, both from businesses and cultural organizations.”

Carbine said these changes have been in the works for a while. She said the public meetings held about Philosopher’s Grove have been well attended by stakeholders.

Carbine said many people were involved in these discussions, from downtown residents and businesses, as well as members of the arts community and folks representing homeless advocacy groups.

“This is a product of all of that input and it is a compromise that may not completely satisfy all stakeholders, but it was a result of a really good participatory public process,” Carbine said.