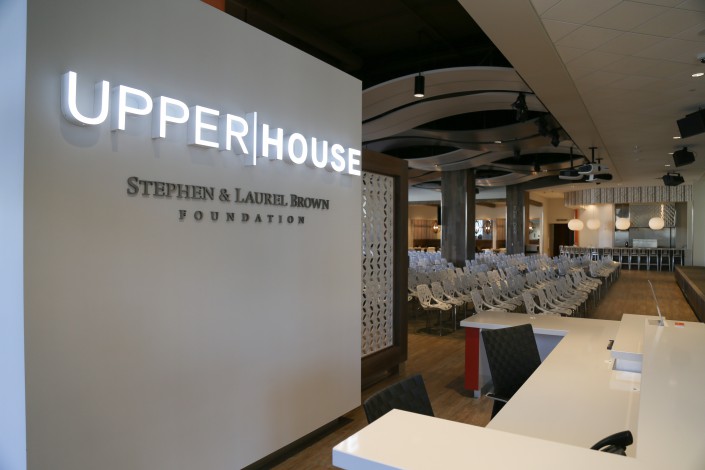 A new religious venue located near University of Wisconsin campus seeks to provide an environment for community members to explore their faith through events such as lectures, discussion groups and concerts.

Upper|House, located on East Campus Mall, is opening Thursday and was founded by the Stephen & Laurel Brown Foundation, who hope to provide students, faculty and the Madison community with a welcoming space to look at the deeper questions of life.

Upper|House will focus on the influence of the Christian faith on vocation, scholarship and service, an Upper|House statement said.

“The goal is to engage the student faculty and broader professional community on some of the things we often don’t wrestle with, such as issues of faith, values, the path we set for service and our professional lives,” John Terrill, executive director of Stephen & Laurel Brown Foundation, said.

The formal grand opening is Thursday, but Upper|House had a ‘soft opening’ in January after the seven month construction project was completed, and has hosted several events, Terrill said.

Upper|House will provide an environment to explore what it means to live out faith through daily jobs, classes and activities, Terrill said.

“We want to highlight interesting topics that would be interesting to the whole campus community, at the intersection of values, morality, life choices, faith and the professions both academic and professionally,” Terrill said.

The space measures about 16,500 square feet, including eight classrooms for groups to request and offices for the foundation, Terrill said.

Laurel Brown, a partner in the foundation, said she oversaw the renovations of the Upper|House space through her architectural and interior design firm.

The Grand Hall can seat around 425 people and has lighting, sound and visual equipment, Brown said.

Steve’s Cafe utilizes the existing structure from the food court as a functioning kitchen. The Den, located next to the cafe, is a more casual spot for students to come hang out, she said.

The Hippodrome is a room for smaller gatherings that can seat about 70 people on the pillowed wooden tiers that create a half circle around floor space and television, Brown said.

The Porch provides the community with another hangout, with artificial turf, hanging chairs and a big screen for watching movies and sporting events, Brown said.

“I think there are a lot of people interested to learn what this place is, so we’re looking forward to getting people within the UW community, community leaders, legislators and marketplace people to carry out the message of what we intend to do here,” Brown said.