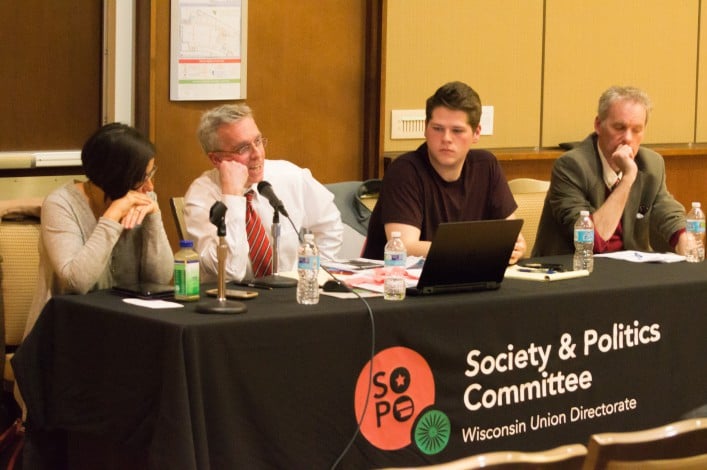 The Wisconsin Union Directorate Society and Politics and the Wisconsin Center of the Advancement of Postsecondary Education members hosted a forum Monday to discuss Gov. Scott Walker’s proposed budget cuts and their potential long-term consequences on the University of Wisconsin System.

The budget cuts will affect research capabilities at UW, Harry Brighouse, a professor of philosophy and educational policy studies, said.

“[A] $300 million cut is a very large cut, and no matter how it is distributed across the system, UW-Madison will bear a very large burden,” Brighouse said.

Current budget cut proposals focus on which services and faculty to cut and what fees to raise, instead of more efficient fiscal management or raising revenue, Sara Goldrick-Rab, professor of educational policy studies and sociology, said.

Instead of facilitating more students and, in turn, collecting more tuition, UW has set itself up so the more students enrolled, the less money it seems to have, she said.

UW, which already lacks diversity, may also be setting up more barriers to entry, particularly to out-of-state and international students, Derek Field, the Associated Students of Madison vice chair, said. Tuition rates could rise by a few thousand dollars in the coming years, he said.

However, Goldrick-Rab said even in-state students struggle with admission due to increasing barriers to entry, such as the university’s unwillingness to grow in size.

“There’s demand in this state from high achieving students who want to come to this institution, but right now they’re leaving our state,” Goldrick-Rab said. “Why wouldn’t we invest in learning how to have more students here, and do it well, to capture that revenue?”

Although UW would take a financial hit with the proposed cuts, other UW System schools could be worse off, Goldrick-Rab said.

UW needs to take a step back and allow the voices of other UW schools to be heard, Goldrick-Rab said. Hearing from a school that is already under-budgeted could have a significant sway on the budget policies discussed in the proposal, she said.

Dedication to improving professional development in regard to undergraduate instruction is less than it could be, leading to an uneven distribution of quality of instruction, Brighouse said.

One argument in favor of the budget cuts encourages UW to move toward a market based approach in regard to finances, similar to some private institutions, Noel Radomski, director and associate researcher for WISCAPE, said. However, the UW System does not consist of four to five universities like the private schools, rather it has 14 to 16 diverse universities with no endowment, he said.

Despite reassurances from administrators that tuition increases would be gradual, history shows otherwise, Field said. A tuition freeze preceded budget cuts in the early 2000’s and two years after the expiration of the freeze, UW saw an 18 to 19 percent increase in tuition cost, he said.

“[This] would be devastating to a lot of students here,” Field said.