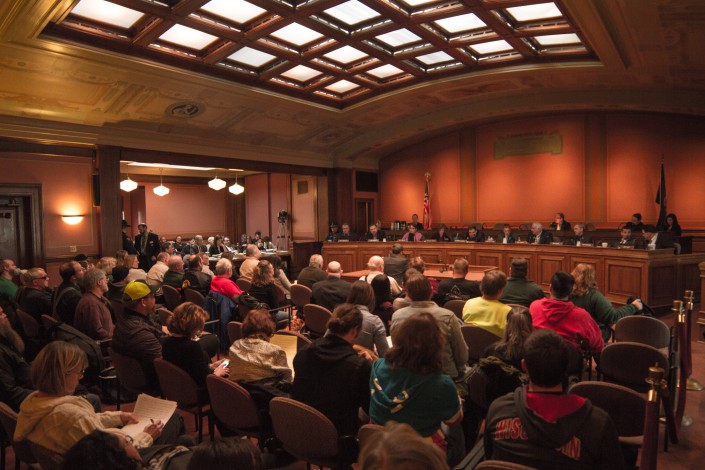 The Assembly Labor Committee heard public testimony for more than 11 hours Monday on the right-to-work bill.

Union opponents outnumbered the supporters at the testimony, with more than 100 people testifying at the hearing. The hearing was scheduled from 10 a.m. to 8 p.m., but went well over time.

The bill would make Wisconsin the 25th right-to-work state. Right-to-work allows workers in unionized workplaces to opt out of paying union dues. Walker’s office has said if the bill reaches Walker’s desk, he would sign it. 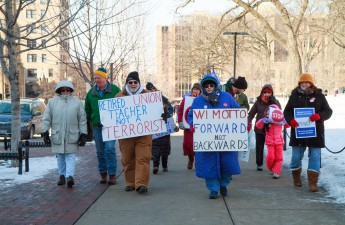 Explained: right-to-work debate picks up paceThousands gathered outside the Capitol over the weekend to protest the proposed right-to-work bill as it moves on to the Read…

Kristi LaCroix, a teacher in Pleasant Prairie, argued in support of right-to-work. She said the union she is in makes her pay dues, but she doesn’t agree with its views.

“It is inexcusable that any American should have money taken out of their paycheck to be given to anything that they don’t agree with,” LaCroix said.

Many critics of right-to-work believe the bill will dismantle private sector unions.

Will Williams, a union member from DeForest, said right-to-work was detrimental to workers and will give employees profit off the backs of the working people. Williams testified against right-to-work and said he did not see how they could sleep at night.

“You’re vampires. You suck the blood out of working people to go and satisfy the people that give you money for your campaigns to pass the legislation that the corporation wants,” Williams said.

A report released Monday from University of Wisconsin-Madison and UW-Extension showed data that said states with right-to-work legislation tend to have lower wages and overall income levels, along with lower education levels and higher poverty rates.

Sen. Steve Nass, R-Whitewater, sent an email to Senate and Assembly Republicans and UW System officials that said he thought the report was “partisan, garbage research” that wasted resources at UW-Madison and UW-Extension, according to the Isthmus.

“If we are doing it because we think it is going to create a better business climate for the state, that is wrong,” Deller said.

Before the hearing, Assembly Republican members held a press conference to discuss the bill. Rep. Chris Kapenga, R-Delafield, said right-to-work is a freedom issue and the fundamental point of the bill was to give people a choice.

Kapenga said they wanted to give adequate time for the bill to be discussed and to look at it from all sides. Kapenga said he did not believe they were rushing the bill too fast, as it is a short bill and has been discussed since December.

“If it was a 1,800 page bill, I could see there may be good reason to step back and say ‘hey, let’s not move it the way we’re moving it,’ but it is literally a three page, four page bill,” Kapenga said. “So it is not complex, where we need to take time to digest what’s in there.”

The full Assembly is expected to vote on the bill Thursday.