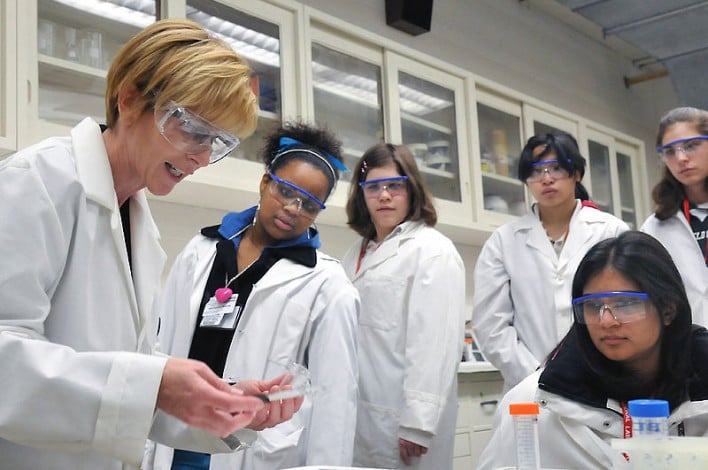 In response to stark inequalities that remain for women in science, technology, engineering and mathematics fields, female leaders at University of Wisconsin are moving forward with steps to address these issues.

According to the UW Data Digest, in 2013 only 20.5 percent of engineering students were women, although ratios varied by specialty.

At UW, organizations such as the Society for Women Engineers support undergraduate women in their professional endeavors on campus, but are aware of the challenges for women that remain, especially after graduation.

“I think women are doing a lot better in schools now because we have these organizations, so I think our generation is more inclusive, but I think there are still areas in the workplace that need to be worked on for inclusion,” Catherine Groh, a student in SWE said.

Mary Fitzpatrick, the director of diversity research and initiatives in the College of Engineering said representation of women in the workplace has not changed since the early ’90s. Practicing women engineers make up only about 10 percent of the engineering workforce, which is highest at entry level but declines through time, she said.

To encourage more young students to consider engineering and science careers and eventually join the STEM workforce, early introduction to such topics is crucial so students can arrange high school curriculum accordingly, she said.

“We don’t really have to convince girls if you meet them in middle school,” she said. “Often times in high school that tends to drop off, when girls are in the mindset that tells them that they maybe won’t be popular if they do something like engineering.”

Lindy Couwenhoven, a member of SWE, said one of the main pillars of their organization is outreach to girls about a future in engineering.

She said their chapter of SWE does outreach for fifth to seventh grade girls, and also coordinates with Girl Scouts who come to campus for a themed day focusing on a specific engineering field. The organization also reaches out to high school girls who have expressed interest in engineering.

Amanda Ochsner, a graduate student in the Department of Curriculum and Instruction, is researching why women do not enter the computer science and gaming industry.

She said research shows even low exposure to computer programming before children reach high school makes one far more likely to sign up for and stay enrolled in a computer science class in the remainder of a student’s academic experience.

Ochsner said when she worked as an editor for a game design company in San Francisco, the proportion of women in game development at the time was close to between 11 and 15 percent. Of these, she said most women work in public relations and publishing in the industry, not game development.

In the wake of Gamergate and other sexist issues related to the gaming and computer design industries, Ochsner urges caution for women entering those fields, but nonetheless encourages girls to consider it.