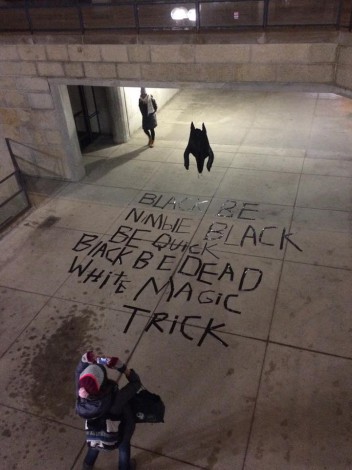 Two hours after its creation, passersby destroyed an art installment reacting to the event at Ferguson, which was made by two UW students at the George L. Mosse Humanities Building Tuesday evening.

The piece featured a black hooded sweatshirt hung upside-down from a walkway on the building with the words, “Black be nimble, black be quick, black be dead white magic trick,” written on the sidewalk in dark-colored duct tape. 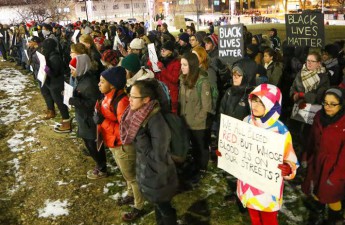 UW students hold vigil outside basketball game for victims of police brutalityAs students and Badger fans filed out of the Kohl center Wednesday night after the Badger basketball game against Duke, Read…

Alex Jackson and Jay Katelansky collaborated on the piece, a project that has been about two weeks in the making.

“The piece isn’t just about Ferguson,” Katelansky said. “It’s about a long discourse in the history of the disposing of black bodies, and it’s important. We wanted to put this on campus because there’s conversations around this topic, and we think that it’s necessary.”

Both students are studying painting at UW. Jackson is a fourth-year student and Katelansky is a second-year graduate student. The idea behind their installation was fueled by the events that have been ongoing in Ferguson as well as the general reaction to “black deaths” in the media.

The artists had permission from the art department to create it, they said. Campus police officers contacted Jackson while the piece was still intact to confirm that the materials they used would not cause damage to the building and allowed them to exercise their freedom of speech, Jackson said.

For the little time it was up, Katelansky said they observed mixed reviews from people who saw it.

“Some people were offended, some people said ‘Right on!’ … It was a mix of different feelings,” she said.

When Jackson shared photos before and after his creation was taken down in a Facebook status, a total of 95 people liked it, 63 people shared it and an additional 53 comments were left on the post.

Jackson said they weren’t surprised by the way people reacted and that they expected it would be taken down at some point.

“The way people reacted further emphasizes the point being made,” he said.

He said both artists focus on implementing messages about racism in their work throughout their time at UW, but this is the first time it has been publicly displayed.

“These issues have existed long before we’ve been here,” Jackson said. “It’s time for us to speak about that in a more public way.”