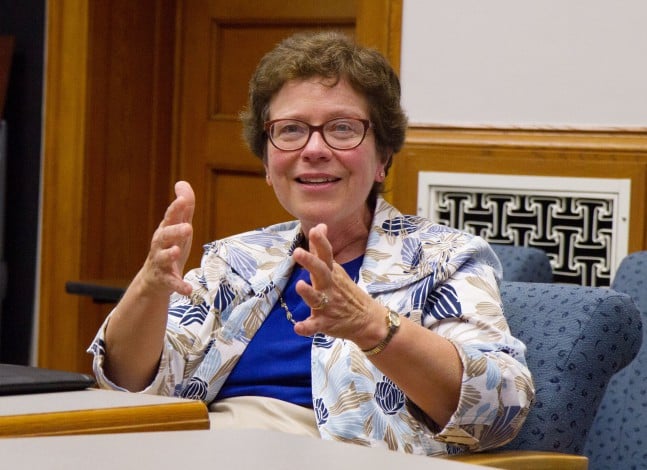 After a record-breaking weekend, Chancellor Rebecca Blank expressed excitement over both Melvin Gordon’s performance Saturday and the announcement of a $100 million donation to the university.

Blank said John and Tashia Morgridge’s gift to the University of Wisconsin is the largest ever received. The donation will be used mainly to recruit faculty and students to work with them, Blank said.

Currently, there are 34 endowed chairs and 102 endowed professorships at UW, which are positions paid for by revenue from the university. This gift could double those numbers, Blank said.

In addition to the gift the university received this weekend, Blank said she enjoyed watching running back Melvin Gordon’s record-setting performance during the football game against the Nebraska Huskers Saturday.

Gordon broke the record for rushing yards with 408 yards and four touchdowns.

“He obviously was just awesome in this game, and setting the record in as short a period time as he did was a really, really great performance on his part, and [it was] good for the team, good for him, it was a great game to watch,” Blank said.

The Morgridges made the announcement of their donation during the football game, making this a whirlwind weekend for the university.

The gift comes after Blank recently made a statement saying the university’s reputation for world-class faculty members was in danger due to monetary constraints, the Milwaukee Journal Sentinel reported.

Along with other donors giving gifts to the university in order to retain faculty, donations could end up being around $200 million, the Milwaukee Journal Sentinel reported.

The Morgridges, high school sweethearts and graduates from UW, have given millions over the past years to causes such as the Morgridge Institute for Discovery, renovations to the School of Education, preservation of the name of the School of Business and the renovation of the Red Gym, according to the Milwaukee Journal Sentinel report.

The Morgridges, along with Warren Buffet and Melinda Gates, have signed “The Giving Pledge,” an initiative thought of by philanthropists to give away 50 percent of their wealth throughout their lifetimes, a UW statement said.

The gift is very much a Morgridge gift — it is not about them, it is about others, Blank said. The names on the endowed chairs will be of other matching donors, not the Morgridges.

“It’s a great weekend to be at University of Wisconsin. I particularly appreciate John and Tashia’s long-time friendship and generosity with the university. They have really made a difference for this campus,” Blank said.