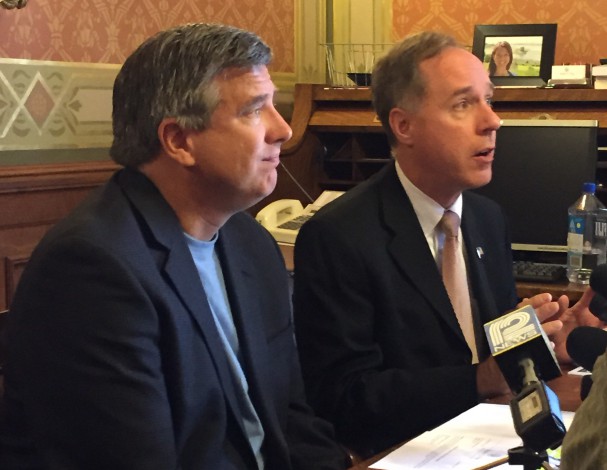 University of Wisconsin System’s request for $95.2 million more in state funding next year will be a “tough ask,” a top Republican lawmaker said Wednesday.

State Rep. John Nygren, R-Marinette, who co-chairs the Legislature’s Joint Finance Committee, said he respects UW System President Ray Cross’ efforts to reach out to lawmakers, but has told him the UW System’s request would be a “difficult sell.”

The UW System has asked Gov. Scott Walker for $95.2 million more in tax dollars in the state’s next biennial budget that will be unveiled next year. The request comes after a two-year tuition freeze in the last budget, which stemmed from revelations of a roughly $650 million surplus in the UW System.

Republicans learn of UW System surplus, call for tuition freezeRepublican leaders called for a tuition freeze at the University of Wisconsin System Friday after learning of a $648 million Read…

“I think I made it pretty clear to him that was probably the most difficult sell for us,” Nygren told reporters Wednesday. “It’s his job and the job of his staff for the next few months to continue to lobby for their asks in the budget. But I would say asking the Legislature to basically backfill the tuition freeze … is a pretty tough ask, but we’re open-minded.”

Cross said in an August statement the UW System’s request for more funding would go toward talent development, which would include improving math remediation and making transferring schools easier.

“We have a talent gap in Wisconsin, and it’s holding back our economy,” Cross said. “To grow, our economy badly needs more high-impact talent.”

The Assembly Republican caucus recently released their agenda for the upcoming legislative session, and it includes extending the tuition freeze for the UW System’s in-state undergraduate students.

Assembly Speaker Robin Vos, R-Rochester, who noted he is a former UW System regent, said lawmakers will also ensure the UW System prioritizes on efforts to grow the economy.

“[We need] to ensure that people who are in the UW System are actually teaching and they’re not using their time for purposes that don’t directly impact the lives in a positive way of students,” Vos said. “Of course I want research, but I want to have research done in a way that focuses on growing our economy — not on, you know, ancient mating habits of whatever.”

Assembly Minority Leader Peter Barca, D-Kenosha, has slammed the majority’s plans, saying it “double[s] down on the same failed agenda.”

Barca said in a statement last month the Democrats’ approach of “investing in the middle class” would boost the economy.

“It appears Republicans have no intention of prioritizing support for our public schools, ensuring affordable health care coverage or many other important issues that are the building blocks of a strong middle class,” Barca said.

Vos spoke a day after Republicans increased their majorities in both chambers of the Legislature, saying it’s “an exciting time to be a conservative Republican.”

As for whether the state will accept the Medicaid expansion it refused last year, Vos said, “No. Period.”