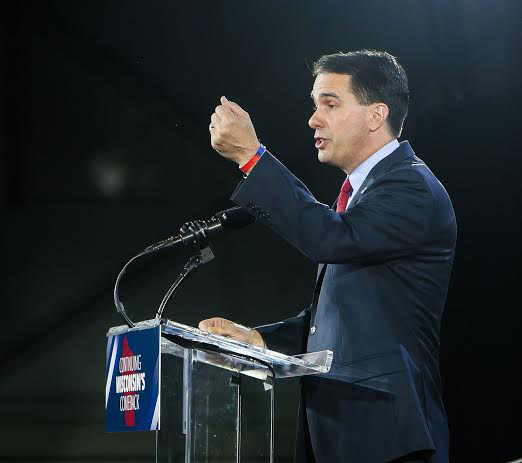 Republicans nearly swept every statewide office on the ballot, re-electing Walker to a second term and increasing their majorities in both chambers of the state Legislature.

“Overwhelmingly, the state said we get things done,” Walker told his cabinet at a Wednesday afternoon meeting.

For much of the race, Walker and his Democratic challenger Mary Burke had been deadlocked, tying each other in several polls. But the final Marquette University Law School poll found Walker up by seven percentage points among likely voters.

Walker ended up winning his re-election Tuesday with 52.3 percent of the vote, while Burke got 46.6 percent, according to unofficial results compiled by the Associated Press.

That’s a 5.7 percentage point margin — about the same as Walker’s margin of victory when he was first elected in 2010. Walker won his 2012 recall election by 6.8 points.

“[Burke’s campaign hoped] they were going to substantially change those turnout demographics … and it just didn’t happen,” Dale said. “We really saw basically the same electorate that turned out in 2010. We wouldn’t really expect a different result if we’re running the election with the same people who are voting.” 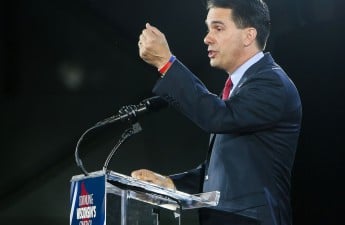 Scott Walker wins re-election as Wisconsin governorGov. Scott Walker will return to the governor’s mansion for a second term, fending off a challenge from Democratic challenger Read…

The governor’s race drew 54.25 percent of the state’s voters, or about 2.4 million voters, according to the Government Accountability Board, which oversees state elections. Not counting the recall election in 2012, Tuesday’s turnout percentage was the highest in a governor’s race since 1962.

Tuesday’s turnout numbers were nowhere near that of a presidential year, and they also didn’t surpass the 57.8 percent of voters who turned out for the 2012 recall election, in which Walker became the first governor in U.S. history to survive a recall challenge.

Burke didn’t turn out as many voters Tuesday in the state’s two largest counties, both of which are reliably Democratic.

Nonetheless, those voters alone would not have been enough to decide the election. Walker took many of the state’s swing counties, some of them with large margins. The swing counties, which switch between choosing Democrats and Republicans depending on the election, included Racine County, the Fox Valley counties in the northeastern part of Wisconsin and other counties spread throughout the state.

“He definitely did better across the board in those swing counties than people had anticipated,” UW-Madison political science professor David Canon said.

Walker also won both Kenosha and Racine counties Tuesday, the two southeastern counties between Milwaukee and the Illinois border. Barrett, a Democrat, had narrowly won Kenosha County in 2010 but lost it when he ran against Walker again in the 2012 recalls.

In total, Walker won 56 of Wisconsin’s 72 counties, with most of those counties supporting him in his 2012 and 2010 elections, as well. Burke won 16 counties, picking up four more counties for Democrats from Barrett’s 2012 loss.

Walker won among suburban and rural voters, with 57 percent and 58 percent of those voters supporting him, according to exit polling from Edison Research. Burke, meanwhile, won 61 percent of voters who live in cities with more than 50,000 people.

The exit polls also suggest a gender gap that turned to Walker’s favor. Although he lost women voters by 9 percentage points, Walker made up for it with a 21-point advantage among male voters.

Burke won voters whose family income is less than $50,000,  while Walker won voters with incomes above that. Walker also won 54 percent of independent voters, while Burke got 43 percent.

Walker did not meet his 2010 promise that the state would gain 250,000 private sector jobs in his first four years. Democrats slammed him for that throughout the race, but that might not have swayed enough voters, Dale said.

“The question isn’t just, ‘What have you done the last four years,’ but, ‘Who do people trust going forward?’” Dale said. “Even if people were unhappy with the progress of the economy, and they think they could be better, they’re still asking themselves who they’d rather have. It’s not just about the record, although that’s part of it.”