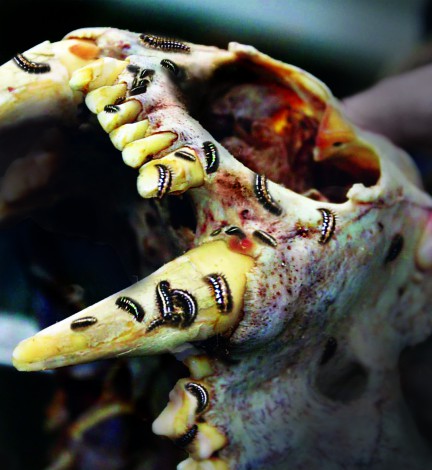 An underground chamber reachable only by a long passage on the side of Bascom hill is home to flesh-eating beetles, left gnawing at skeletal remains for research.

University of Wisconsin’s Department of Zoology is host to this dermestarium, a dungeon-like room that holds four to six steel tanks of dermestid beetles.

“A few days or weeks after being placed in the tanks, the larvae of these beetles render a skeleton so clean that only minor preparation is needed before the specimen can be cataloged into the museum’s research collections,” UW Zoological Museum describes on their website.

The collection making up the Zoological Museum consists of bones and fossils for UW professors and classes to look at and work on, but the work could not be done without the help of the dermestid colony housed on campus.

“The animal parts are placed in cages with a kind of beetle, which feeds on the remains until the bones are completely clean. The cellar has been equipped with modern heat and a new door, and the smell is no better than might be expected,” Jim Feldman, history professor at UW-Oshkosh and UW-Madison alum, said.

The history of the dermestarium goes all the way back to 1876, when it was built by James Livesly, Feldman wrote in his book, “The Buildings of the University of Wisconsin.”

“Federally supplied equipment was installed and experiments were up and running by 1878.  As such, it was the first building constructed on the university campus for a federal science project,” Feldman said.

There was no iron used in the building to avoid magnetic interference, and three feet of dead air space to maintain a steady temperature, Feldman said.

While the project received federal aid in the beginning, it did not last for long.

“The federal program ended in the middle 1880s, and the observatory was used for other purposes, and is now used by the department of zoology to strip flesh from animal skeletons,” Feldman said.

The Coast and Geodetic Survey Department were the initial users of the dermestarium, in order to conduct experiments to determine magnetic force using photographs.

However, due to financial strains and opposition from the U.S. Congress, the Coast and Geodetic Survey Department collapsed and the dermestarium was used for experiments on curing cheese and a storage cellar for oils and potatoes.

In 1903, the Biology Department gave permission to the professional chemistry fraternity Alpha Chi Sigma to use the lab for initiation rites.

“The cool, secretive and echo-y atmosphere of the lab gave rise to fraternity lore that persists to the present day,” the zoology site said.

In 1950, the university renovated the magnetic observatory for the Department of Zoology to use as a research center.

Shortly after, the university’s beetle population was housed there and has been requiring a great deal of attention ever since.

The Zoological Museum took over the dermestarium in order to care for the dermestid colony.

“Constant vigilance is necessary to maintain the proper temperature, humidity, cleanliness and food availability for the beetles to work at peak capacity,” the zoology site said. “The dermestarium is not open for public tours or use.” 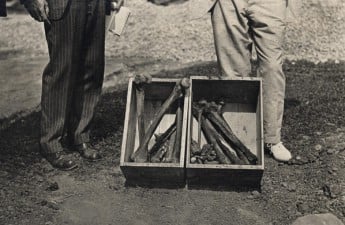 Bodies of two Madison men are buried on Bascom HillWhile thousands of students walk across the terrace in front of Bascom Hall each week, very few realize what lies Read…