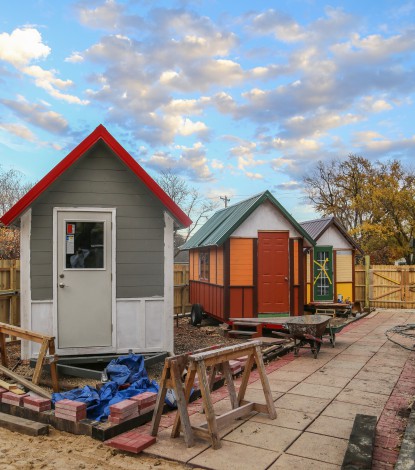 As affordable housing in Madison continues to be a concern, a nonprofit group is trying to have a big impact with their tiny houses.

“The tiny houses can be the first step in bettering their lives,” Barkoff said. “The people receiving the houses were literally out on the streets. This is a secure place to live and keep their possessions.”

Barkoff said while the stewards of the houses do not own them, they will still clean them and take care of them.

To qualify for a tiny house, each person must put in 32 hours of “sweat equity” while helping build the tiny houses themselves. After qualifying, the person must additionally complete up to 500 hours of volunteer work on the other houses to help pay off the mortgage. They also must live cooperatively with the other residents of the tiny house village to help the operation run smoothly, Barkoff said.

Occupy Madison’s end goal is to build nine of these tiny houses. For the first phase of the project, the organization is focused on renovating the first three of the nine houses, Barkoff said.

Barkoff said the plan is to have the improvements on the properties finished and the stewards in the houses by the next couple weeks.

“At the beginning, people were concerned with how it would affect property value and what would now be coming into the neighborhood. Since then, people have come around,” Palm said.

The project all started with the Occupy Wall Street movement in 2011, and homeless people were attracted to the Madison encampment the same year, Barkoff said.

The nonprofit organization Occupy Madison started as a protest against economic inequality and evolved over three years to focus on homelessness, Barkoff said.

Occupy Madison’s mission is to help provide safe housing in a sustainable way for people without homes and a place for them to work cooperatively, Barkoff said.

That next year the organization rented a warehouse to begin the building. In the spring, they purchased property at 2046 E. Johnson St., and they have been renovating ever since, Barkoff said.

Palm said the organization focused a lot of attention on how to ensure the project would meet the city’s standards. These difficulties included figuring out appropriate zoning and commercial use.

“We want the village to be a model for other places and have it be replicated in other communities,” Barkoff said.

So far, a couple and two other single people have qualified to live in the first three tiny houses, Barkoff said.

Barkoff said the project is always in need of money and volunteers to help with actual construction, working on the website and putting on fundraisers. There are work sessions at the site every weekend from noon until 5:00 p.m.

“The ultimate goal is to have a city in which everyone has a place to live,” Palm said.