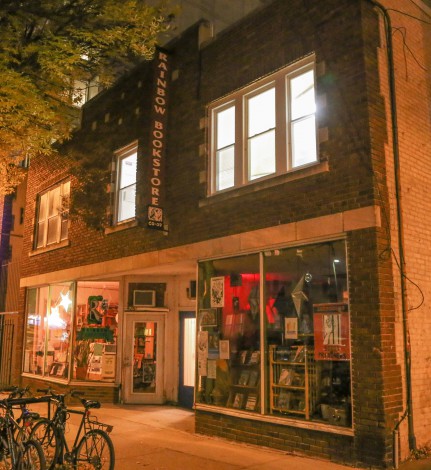 As local bookstores’ sales struggle against online retailers like Amazon, places like Rainbow Bookstore Cooperative are finding ways to adapt and keep their faith in print.

Rainbow, located on West Gilman Street, relies heavily on textbook revenue, which Joshua Stuewer, member of the store’s board of directors, said has been enough to keep them in business for the past five years now.

“Book sales have been affected by Amazon since its inception here, so it’s been increasingly more of a force to be reckoned with for us,” Stuewer said. “Now it seems to have plateaued a little bit. It’s a struggle to keep treading water.”

The store used to have an online sale feature on their website, but Stuewer said it was not utilized much due to competing Amazon prices.

Stuewer said they rely more on people who intentionally do not buy from Amazon because of what they are doing to the book business.

“When people are buying stuff online the dominant rule of thumb is thrift, so people are always wanting to get what’s cheapest,” Stuewer said. “For obvious reasons we can’t compete with that.”

Steve Schiebel, manager of the text department at the University Bookstore, said the online trend has not had a great affect on textbook sales.

“If there’s a possibility, the print option is still the most popular,” he said.

Debbie Rasmussen, another member of the board, said she does not use an e-reader herself, but she is not opposed to it.

“I know a lot of people whose hearts are still in print, and they still read books, but they still read the e-reader,” Rasmussen said. “But there’s definitely something about holding a book, smelling a book, that feels really important.”

With print sales still being low, Rainbow said they are trying to evolve into more of a community space.

They house a “books-to-prisoners” project serving incarcerated people in Wisconsin, and another project serving the LGBT community across the country. They are also the distribution for Street Pulse, the homeless cooperative newspaper.

“There were definitely some people that felt that it was just time to call it a day and surrender to these bigger forces, and there were others of us who felt we could keep going if we just tried to restructure and make ourselves more relevant,” she said.

Rasmussen said they are considering adding a food component, offering coffee and healthy treats, which she said seems to be a trend for independent bookstores around the country.

“People are always excited to see us,” Rasmussen said. “We joke about how we hear people all the time on the street saying ‘I’m so glad Rainbow is still there, they can’t close.’ Well that’s great, but we need you to come into the store more often.”