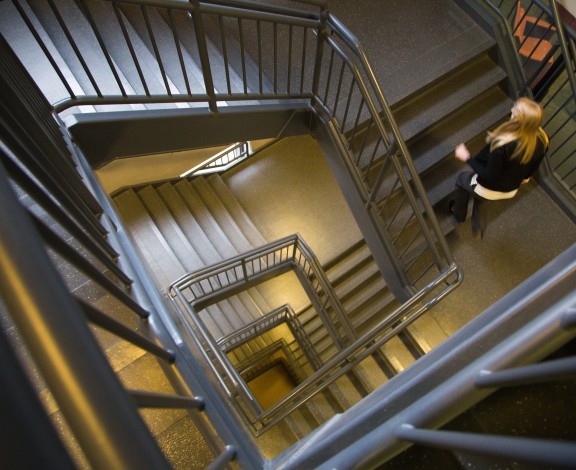 After a 15-minute walk to class, many students opt not to take the stairs, but a University of Wisconsin marketing course is looking to change that.

In an effort to increase sustainability on campus, the course, taught by professor Evan Polman in the UW School of Business, recently conducted an experiment to find out what it takes to get people to choose the stairs over an elevator.

Polman said the experiment began as a classroom discussion about how some businesses leave notes and messages to persuade consumers to behave a certain way, such as when hotels leave placards in bathrooms asking guests to reuse their towels. Grainger Hall began to use similar messages on wall-mounted signs to encourage students to use the stairs, he said.

“We started talking about how to make the messages more convincing,” Polman said. “A student suggested putting jokes on the signs with the punchlines placed in the stairwells.”

Eventually, Polman said the class decided to use trivia questions instead of jokes. In addition, the class picked trivia questions that had multiple answers to encourage people to keep walking up the stairs to find all of the solutions, he said.

Business professor Joann Peck helped Polman and his class with the development and execution of the study.

“We had to put sensors in the stairwells, which we monitored for nine days, in order to get some baseline data about stairwell use,” Peck said. “The experiment itself ran for 23 days, and we saw an 8.3 percent increase in use of the stairs.”

She said these results were exciting, considering similar interventions only achieve increases of about 5 percent normally.

The best part about the experiment is that any business could theoretically implement it, Peck said.

The psychological mechanism at play in the experiment depended on a person’s need for closure, similar to how TV shows such as “Breaking Bad” or “Game of Thrones” end in cliffhangers to make people instantly want to watch the next episode, Polman said.

Polman said he would like to pursue similar experiments in the future. The next step would be to expand the study and make it campus-wide, he said.

While it would be difficult to change the trivia questions regularly, it might be possible to display the questions and answers on iPads, mounted and locked in on walls in building stairwells, Polman said.

It would be great if more people would try this around campus, Peck said, adding they have received positive feedback on the study.

Polman said he thought the experiment was a good lesson for his students because it was a creative exercise that took place outside the classroom. He said the study also taught his students how to change environments to make people achieve their goals.

“The experiment felt more meaningful and practical because the students were heavily involved,” Polman said. “They created the idea, and I was really just the facilitator.”