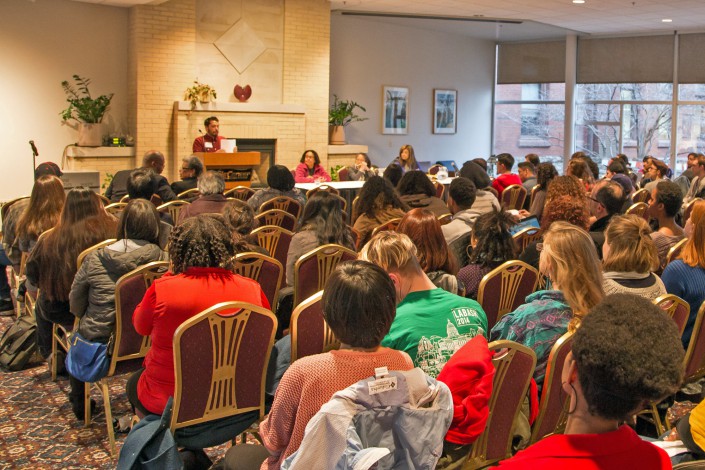 With charges that a proposal to consolidate the University of Wisconsin’s ethnic studies departments marks a “crisis,” attendees at an open discussion Wednesday voiced concerns about the future of these subject areas.

As rumors have floated around campus, an open discussion was held regarding the proposed consolidation of an ethnic studies department at the University of Wisconsin Wednesday.

Talks of a possible consolidation first arose when the Afro-American studies department underwent a 10-year review this year, which forced a reevaluation of its current budget. Faculty members proposed two solutions: either to rebuild their department internally or to consolidate with three other ethnic studies programs, [email protected]/[email protected] studies, Asian American studies and American Indian studies.

Regarding the consolidation of ethnic studies programs, Ben Marquez, the director of [email protected]/[email protected] studies program, said he does not think this would be a positive solution. He said it would impact diversity at the school as well as students on campus who are interested in learning about these different cultures.

“The ethnic studies programs are often poorly supported, neglected and underfunded. Resources have gone elsewhere, even though we have asked for resources for programming and hiring new faculty members,” Marquez said. “We don’t have any faculty members that are appointed directly to this program. A lot of our faculty members who are affiliated with the program are teaching these courses because they are invested in it.”

Marquez said he is worried the department would start shrinking when these professors retire.

Jorge Rodriguez said as a graduate student teaching and working at UW, he has always valued the notion that context and history matter.

“In my view, the consolidation of ethnic studies at UW-Madison cannot be implemented with the simplistic reasoning of budgetary restrictions,” Rodriguez said. “What then is the College of Letters and Science doing to respect and acknowledge the collective and institutionalized memory of UW-Madison, specifically regarding equity, diversity and inclusion?”

Ethnic studies are in crisis, and departments have vanished in past years, Thornton said. It is not a new trend on campus, he said, and is only driven by a desire to save money.

Roberta Hill, a professor of English and American Indian studies, pointed to the University of Michigan and the University of Minnesota as examples of consolidated programs. Michigan has a single large department of ethnic studies which houses six programs and 49 faculty members, she said.

Minnesota also consolidated departments to support their ethnic studies programs and their consolidated faculty number is now larger than what UW has in its separate programs, she said.

The Afro-American studies department has “no desire or intent” to force other programs on campus to combine with them, Thornton said. Consolidation would not happen over night and cannot happen without equal cooperation, he said.

“They want to silence the voices which challenge the world, but we want our ethnic studies to be healthier and stronger. We are not trying to exclude anyone; we want to include everyone. We don’t want to dominate others or eat them up,” Thornton said.