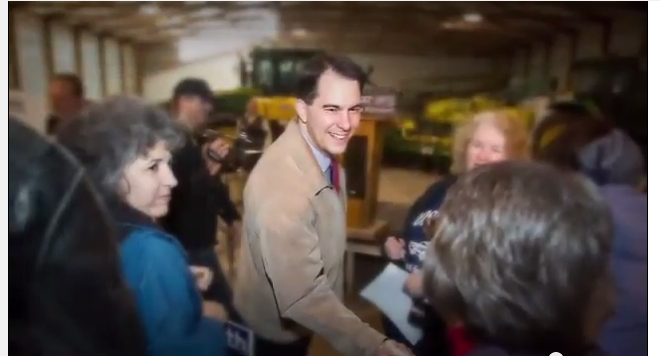 Gov. Scott Walker and Lt. Gov. Rebecca Kleefisch kicked off their re-election campaigns with an announcement Tuesday morning in which the candidates emphasized job creation and economic growth.

In a statement announcing the campaign, Walker said while progress has been made on many fronts including job creation and tax relief, work still needs to be done.

“We’re better off than we were four years ago, but there is more work to be done,” Walker said in the statement. “In the past, April 15 was a day we didn’t have much to look forward to in Wisconsin. But this year, we have hope for the future. This is a new beginning for our state. Wisconsin is back on, and our best days are ahead of us.”

The Republican Party of Wisconsin hailed the campaign announcement, citing the differences between the Walker-Kleefisch administration and their Democratic predecessors.

According to a statement from the state GOP, the administration has achieved more than $2 billion in tax cuts, created 100,000 new jobs and 16,000 new businesses and reached an unemployment rate of 6.1 percent, the lowest since 2008.

“Four years ago, the debate in Madison revolved around the size of tax increases, but now we’re discussing tax cuts and government reform,” RPW Chairman Brad Courtney said in the statement. “We’ve come a long way, but we still have so much more to do.”

Democratic gubernatorial challenger Mary Burke challenged the claims made by the administration and said in a statement the state has fallen behind in job creation. She also said the middle class has not benefited from Walker’s tax cuts.

Democratic Party of Wisconsin Chair Mike Tate responded in a statement, and said Wisconsin ranks 35th in job creation and is one of the five worst states for new business startups. He said Walker failed to meet his campaign promise of creating 250,000 jobs.

In the statement, Burke highlighted her plan for economic growth in the state, called “Invest for Success.” The plan includes government investment in key industries and higher education. Burke also cited her experience in creating jobs as an executive at Trek Bicycle.

“We are in our fourth losing season with this Governor and his failed game plan,” Burke said in the statement. “It’s time for a new direction. It’s time for Wisconsin to lead, not lag.”

According to the statement, the Burke campaign has planned a statewide tour for the week including stops in Milwaukee, Wausau, Superior, Eau Claire, La Crosse, Appleton and Waukesha.

Walker said investment in worker training programs will be essential in closing the skills gap and will allow the unemployed to achieve the skills necessary to get jobs.

“Four years ago, I aimed high and set big goals because I believe in Wisconsin, and we are on our way,” Walker said in the statement.

The two candidates made appearances in Dane, La Crosse, Chippewa Falls, Schofield, Green Bay and West Allis throughout the day following their announcement.

The release of a new campaign ad entitled “Anthem” accompanied the launch of the Walker-Kleefisch campaign, which focuses on the economic growth under the Walker administration.