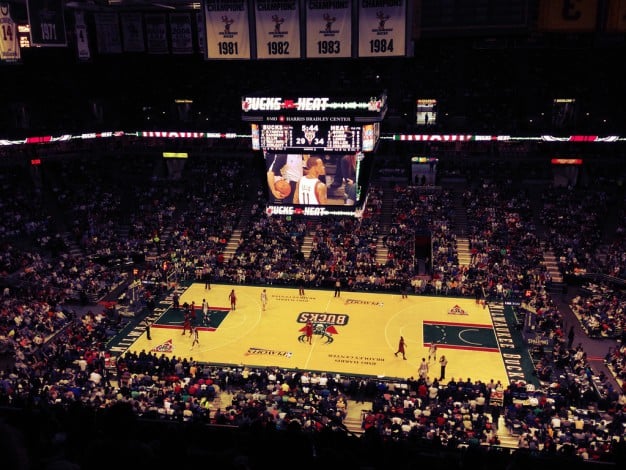 After almost a year of debate, little progress has been made toward building a replacement arena for the aging BMO Harris Bradley Center, home of the Milwaukee Bucks.

NBA Commissioner Adam Silver announced in September that the current arena does not meet the league’s stadium standards. The Bucks’ lease on the Bradley Center expires in 2017, which has become the de facto deadline to have plans in place for a new arena.

“Silver has declared that the Bucks’ situation has to change. Otherwise, there could be future ramifications. Basically, there has to be considerable progress or at least a plan in place by 2017,” Paul Henning, spokesperson for the organization Save Our Bucks, said.

The Bradley Center, which receives state funding through grants, brought in $20.7 million in state revenue in fiscal year 2013, according to a statement released by the Bradley Center.

As far as basketball stadiums go however, the Bucks’ stadium is a “senior citizen,” Steve Costello, president of the BMO Harris Bradley Center, said in the statement.

“It is becoming more and more difficult to maintain the building — and a stable fiscal position — amid the challenges that we face,” Costello said. “The uncertainty surrounding the Center’s future adds to our challenges, and we are trying to do what we can with extremely limited resources.”

The Metropolitan Milwaukee Association of Commerce is overseeing the planning of the new arena, which could cost anywhere between $400 and $500 million, Ted Kellner, MMAC chair, said.

Wealthy Wisconsinites have pledged private funding, including team owner Herb Kohl, but Henning, Kellner and Milwaukee Mayor Tom Barrett agree that a certain amount of public funding will be necessary for the completion of the project.

“Right now [the MMAC] is still trying to come up with a plan to fund this complex. There have been conversations about different funding sources that can be very controversial,” Barrett said. “My perception is that [they hope] they can come up with something that will be palatable for people from many counties in southeastern Wisconsin.”

Given Wisconsin’s recent history with similar projects, Barrett said acquiring public funding will take a lot of work and compromise.

When Miller Park was built in Milwaukee in 2000, revenue was created by a 0.1 percent increase in sales tax for Wisconsinites living in surrounding counties, an increase that is still in place. Former Sen. George Petak, R-Racine, voted positively on the tax and was recalled as a result, Henning said.

Kellner said the arena is relevant beyond keeping the Bucks in Milwaukee, as the stadium will have major economic benefits for the surrounding communities.

“Most [stadium projects] take place with development around them, and that’s what we’re focusing on — not just the [BMO Harris] Bradley Center, but development that might be an offshoot,” Kellner said.

Henning pointed to a recent NCAA basketball tournament game at the Bradley Center as evidence of economic benefits. He said 6,000 hotels rooms were rented, contributing to the combined $5 million of revenue created in one weekend.

However, Henning also said drumming up support for a new arena is difficult because the current arena is still functional.

The main issues with the current arena are a leaky roof and a water system that is in need of replacement, Henning said. The BMO Harris Bradley Center is the 29th oldest arena in the NBA.

Beyond funding, few details of the new arena have been discussed. Decisions yet to be made include where the future site of the arena will be located as well as its size and amenities, Kellner said.